The Second Digicel Test at the Grenada National has been transformed into a second innings battle after an even first innings contest. On day two Bangladesh were curtailed to 232 by an outstanding six wicket haul from Kemar Roach in response to the West Indies? 237 on the first day. The lead was a negligible five runs and at the close of the second day West Indies have added another 56 runs for the loss of Dale Richards? wicket for 12.

Starting the day on 35 for 1 the visitors were hindered by a controlled Windies attack, which, for long periods, aimed to dry up runs and force the Bangladeshis into playing impatient shots. The strategy worked for the most part to break the Tigers down to 157 for 7 but a belated fight back gave them momentum. 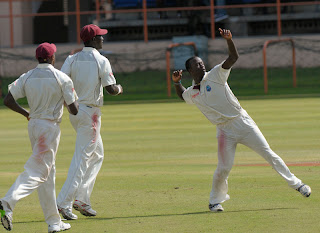 While the other bowlers delivered within their limitations, Roach, playing in his second Test and bowling with genuinely fearsome pace, registered a career best 6 for 48 from 23.5 overs as he mopped up the feisty Bangladesh tailenders. The performance will certainly allow the Clyde Butts led West Indies selection panel to earmark the diminutive pacer for certain selection to the first choice West Indies team whenever it is reconvened following the industrial action taken by the originally selected players.By lunch the Tigers had lost four more wickets to be 134 for 5 and at tea they were 217 for 7 and in the midst of a late order fight back orchestrated by pint sized wicketkeeper, Mushfiqur Rahim who top scored with 48 (58b, 6×4, 1×6).Middle order batsman Raqibul Hasan also got into the 40s but fell six short of what would have been a maiden half century in his fifth Test. Hasan faced 103 deliveries and struck four boundaries while opener Tamim Iqbal contributed 37 (59b, 6×4).With Bangladesh in danger of allowing a significant first innings lead at 157 for 7, Mushfiqur partnered with spinner Mahmudullah (28) to put on 52 runs for the eight wicket. The pair was aided by loose bowling from Ryan Hinds in particular and puzzling bowling changes by captain Floyd Reifer who allowed Hinds to bowl much longer than conventional wisdom would have dictated.Mushfiqur was content to repeatedly cut Hind?s left arm spin to the boundary as the Windies let their advantage slip.The wicketkeeper, who, by some distance, is the shortest player in international cricket, fell with the score on 219 after Roach was belatedly returned to the attack. The Barbadian pacer obliterated the last three wickets in 23 deliveries which cost a miserly 2 runs as he bowled with irresistible pace reminiscent of West Indian fast bowling of another era.Windies wicketkeeper Chadwick Walton, who has so far proven out of his depth with the bat on the international stage, looked better equipped behind the stumps. He executed a stunning diving take and took five catches in the innings but his batting has been schoolboyish, both in the first innings and the previous Digicel Test in St Vincent which Bangladesh won by 95 runs.The home side needed to negotiate 23 overs to the end of the day and did so with Travis Dowlin ? who missed a century by five runs in the first innings ? on 23 and opener Omar Phillips on 17.Dowlin enjoyed one life before he had gotten off the mark when he was put down by Junaid Siddique off the bowling of Mahmudullah. Windies lost daredevil opener Richards, who became tentative and went lbw to stand in captain Shakib Al Hasan as soon as he introduced himself into the attack.With three full days remaining a result for either team can only conceivably be prevented by bad weather, which, regrettably is forecast. Bangladesh lead the Digicel Series 1-0 while the locals are desperate to even it and save face. To do so they will need to set Bangladesh a total well in excess of 350 and bowl purposefully as they have done for the most part throughout the two Digicel Test matches. {NB – All photography courtesy Brooks La Touche Photography and DigicelCricket.com}