Playing For Change On The Road – From Glastonbury to New Orleans

It has been an exciting couple of weeks for Playing For Change! The weekend before last the Playing For Change Band headlined the Jazz/World stage at Glastonbury. For that very special performance, they were joined by Baba Maal, Vusi Mahlasela, Tinariwen, and the Omagh Community Youth Choir! Following our performance at Glastonbury, the PFC Band returned to the states to perform a free show at the Santa Monica Pier last Thursday that was attended by over 10,000 people! (To read more about the show and view photos check out the latest here)

If you were unable to catch either of these performances, don’t worry– we’ll be sharing songs and footage with you in the future. 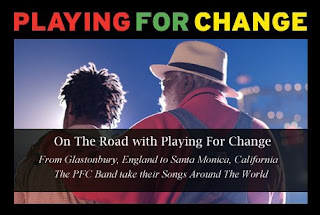 Finally, if you live in (or near) New Orleans, the PFC Band is going to be playing Tipitina’s Uptown on Saturday, July 18th. The band hopes you can join them for what will be an inspiring night of music, and love in one of the greatest cities for music in the country. For more information about the band, musicians, their upcoming gigs, and more check out the band’s page by clicking on here!