Led by an outstanding five wicket performance from off spinner, Mahmudullah, Bangladesh registered their only overseas Test victory with a 95 run win over the reconfigured West Indies team which collapsed to 181 all out in their second innings of the First Digicel Test at Arnos Vale.

Set 277 to win, the West Indies run chase was never realistically on as the Bangladeshi spinners pressured them into submission and squeeze out a momentous conquest. 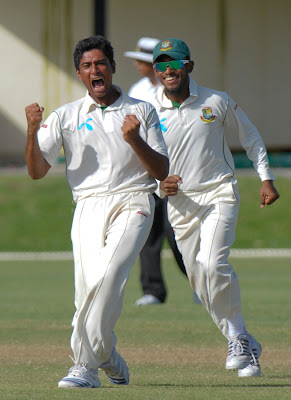 The 23 year old Mahmudullah picked up 5 for 51 from 15 overs as Bangladesh claimed only their second Test triumph – the previous being against the lowly ranked Zimbabwe at home. That the team they beat was a hastily organized bunch of cricketers assembled the night before the Test did not matter to the Bangladeshis. That the originally selected squad of regular players took industrial action was of little concern to the young and motivated Bangladeshi team.Despite a resilient half century from Jamaican all rounder, David Bernard Jr, the home side folded in 70.1 overs with no other batsman being able to get past 19.

Bangladesh started the final day on 321 for 5 and were quickly dismissed with their last five wickets falling for 18 runs and the innings ending on 345. Darren Sammy (30.1-6-70-5) picked up his second career five wicket haul to allow the Windies a chance to pursue victory.

They had 80 overs to achieve 277 but lost both openers (Dale Richards and Omar Phillips for 14 each) before lunch which was taken at 66 for 2.

After lunch Mahmudullah struck three considerable blows to leave the home side tottering at 82 for 5. First the debutant spinner trapped captain, Floyd Reifer, lbw for 19 then had Travis Dowlin caught by Imrul Kayes, also for 19 and wicketkeeper, Chadwick Walton, like Reifer, went lbw for 10.

There was a period of resistance between Bernard, who made an impressive unbeaten 52 (his second half century of the match following his 53 in the first innings) and Darren Sammy who was the third batsman to get out on 19. At 119, the left arm spinner, Shakib Al Hasan, struck as Sammy essayed a reckless slashed stroke and was caught by Shahadat Hossain at point. 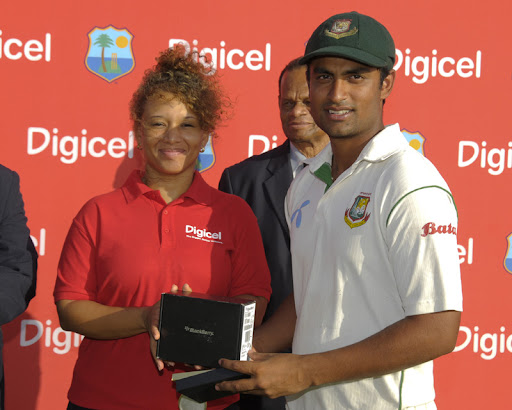 Bernard, who, critically, faced 134 deliveries and hit five inconsequential fours, then found an ally in Nikita Miller (5) who resisted for 17.2 overs but Mohammad Ashraful broke the 32 run partnership when Miller edged to wicketkeeper, Mushfiqur Rahim. The remaining three wickets were floored in the next 12.3 overs and the Bangladeshis went berserk in celebration even ripping out the stump cameras as they cavorted, hugged and screamed in understandable delight at their historic achievement.

Mahmudullah returned to secure his third lbw victim (Ryan Austin for a 24 ball duck) and Kemar Roach made 3 from six deliveries before he edged to Mushfiqur. The ninth wicket fell in the 66th over and Shakib formalized the victory when he found stranded Tino Best (9) plumb in front.

Shakib, who captained the side in place of the injured Mashrafe Mortaza, proved an able and cunning leader and supported with 3 for 39 from 28.1 overs. 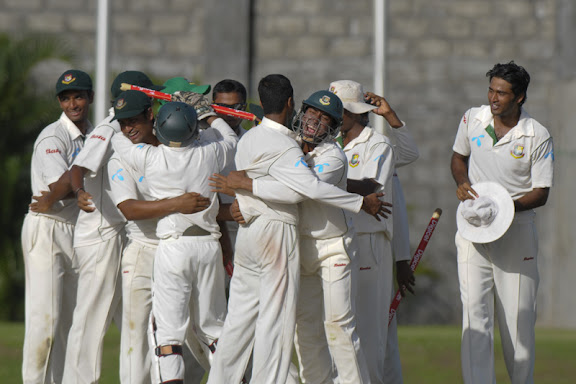 The Digicel Test Series now moves to Grenada for the final Test before the three match One Day International Series and one off Twenty20 in Dominica and St Kitts. {NB – All photos courtesy Brooks La Touche Photography and DigicelCricket.com}