West Indies coach, John Dyson, says that despite his team?s losses in the Digicel Test Series, 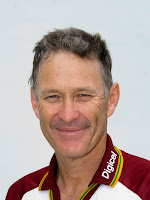 he is expecting competitive performances in the three match Digicel One Day International Series against Bangladesh. ?This is a totally different game now. We?re playing 50 over cricket, not five day cricket. The matches (two Digicel Tests) were closely fought, it wasn?t a case where we were thrashed in either of the matches, we could have won both so I don?t think there?s much in it,? said Dyson ? a former Australian batsman ? upon arrival in Dominica where the first two Digicel ODIs will be played.

Reflecting on the performances of the Test squad which was made up of replacement players ? following strike action by the originally selected players ? Dyson said he was not disappointed with the way they performed. ?For guys who had little experience in international cricket to come forward like that and play as well as they did, I think they did pretty well,? Dyson said. ?They?ve played some good cricket so far, unfortunately we weren?t able to get across the line and win the two (Digicel) Test matches but they were very closely fought,? said Dyson, who is also a former head coach of Sri Lanka. Dyson also called for pitches which will nullify the Bangladesh spinners and aid the West Indian pacemen.

?I?m looking forward to the One Dayers, what I?d like to see is a hard, pacy, bouncy wicket,? Dyson pleaded. Dyson?s call for pacier pitches is understandable on two accounts, given the statistics from the two Digicel Test matches in St Vincent and Grenada. Firstly, the Bangladeshi spinners ? led by captain, Shakib Al Hassan ? have been dominant. They took 33 of the 40 West Indies wickets in the Digicel Series. Left arm spinner Shakib ? who was named Digicel Man of the Series ?

and off spinner, Mahmudullah Riad, both took five wicket hauls. The duo along, with Enamul Haque Jr, who played in the Second Digicel Test, worked over the West Indies batsmen, sometimes with ease.

Secondly, the West Indies spinners ? Ryan Austin, Nikita Miller and Ryan Hinds ? only managed four wickets between them from the 36 Bangladeshi wickets to fall. The Windies pacers – Kemar Roach and Tino Best – and medium pacers – Darren Sammy and David Bernard Jr – did the bulk of the wicket taking.

Roach ? who debuted in the First Digicel Test ? outshone the more seasoned Best and accounted for 12 of the 15 wickets taken between the two. Disappointingly, Best went wicketless in the Second Digicel Test while Roach bowled with disconcerting pace and bagged an impressive career best 6 for 48 in the first innings.

Sammy also had impressive returns by producing back-to-back five wicket hauls. In St Vincent, Sammy took 5 for 70 in the Bangladesh second innings and in Grenada he had identical figures. Of the 16 wickets taken by the Windies medium pacers, Sammy took 12 while Bernard managed four.

Only Shakib – who took 13 wickets in the Digicel Series –

registered a higher number in the wickets column.

While both Austin and Hinds have not been retained for the Windies Digicel ODI squad, left arm spinner Miller is included and Grenadian leg spinning all rounder Rawl Lewis will partner him. However, the West Indies will be mostly relying on Roach, Sammy, Bernard Jr and Nelon Pascal ? who was in the Test squad but did not play ? along with rookie Antiguan pacer, Gavin Tonge.

It is no surprise therefore that Dyson is keen on a pitch which will offer some assistance to the pacers.

Despite an end to the strike action by the first choice players, the WICB retained the Floyd Reifer-led squad which arrived in Dominica on Wednesday afternoon. International cricket will be played for the first time on the island at the newly built Windsor Park stadium.

The First Digicel ODI is slated for Sunday, July 26th, and the Second Digicel ODI on Tuesday, July 28th,which has been declared a national holiday by the island?s Prime Minister, Roosevelt Skerrit.