On a large North American tour promoting his new upcoming album ?CONTAGIOUS? (in stores Aug. 4th) TARRUS RILEY will be making a stop in Montreal once again and will perform LIVE at the new TELUS Theatre (1280 St-Denis /corner Ste-Catherine) on Friday, August 28th, 2009 with his Blak Soil band, alongside DUANE STEPHENSON, and Jamaica?s highly acclaimed saxophonist, composer, artistic director, songwriter, and much more; Mr. DEAN FRASER. Also performing live will be Montreal’s best reggae/soul artist MELLO G and his band who stole the show at last year?s Calgary Reggae Festival, as well as Easy B (from Barbados), King Shadrock, I-Jah, Lindsay, and introducing Dee Luxe. Music by Little Thunder Sound Crew and DJ Skizz; if you?ve missed the last show, you don?t want to miss this full-filled reggae event!

About Tarrus Riley
One of the most promising of the second generation of Jamaica roots reggae singers, Tarrus Riley is the son of Jimmy Riley, who has had a long career as a solo artist as well as being a former member of the Uniques and the Techniques. 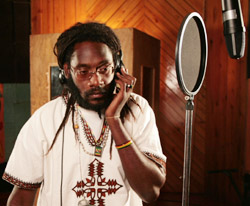 Like his father, Riley has a sweet, nuanced tenor vocal style, although his first connection with the Jamaican music scene was as a DJ (under the name Taurus). Riley taught himself to play keyboards and several percussion instruments and began writing his own songs, many of which had strong Rastafarian and consciousness-leaning themes. His sophomore album Parables is suitably titled; each song is a lesson from the book of life, illustrating moral or religious lessons. Produced by the multi-faceted Dean Fraser, Parables boasts 14 original tracks out of 15 and includes the monster hits “She’s Royal” and “Lion Paw.”

Tarrus is a singer of superb talent who has taken the reggae world by storm. His music is about love, it is spiritual and it is danceable. On stage he is electrifying and extremely entertaining. His new album Contagious is a potpourri of musical progressions, melodies and soulful ballads…

originally out of Toronto), I-Jah who?s exploding on the Montreal reggae scene in recent months, a special appearance by Easy B out of Barbados, as well as Lindsay and introducing Dee Luxe will all be performing live.