West Indies captain, Floyd Reifer, says that his team is keenly aware of the critical need to level the two match Digicel Test Series by

beating Bangladesh in the Second Digicel Test at the Grenada National Stadium.

?The guys are very confident, we know we have to win this game, we know all the things we have to do, we know what is expected of us, we are just asking the people of the Caribbean to continue to support the team and we are asking the people in Grenada to come out and support your team,? said Reifer, whose side lost the First Digicel Test at Arnos Vale in St Vincent by 95 runs.

It was Bangladesh?s first overseas Test victory and their second ever Test win, having beaten Zimbabwe four and a half years ago at home. The thirty six year old Reifer, who is seven days shy of his thirty seventh birthday, identified batting as an area where the West Indies team needs to improve to reverse the result. 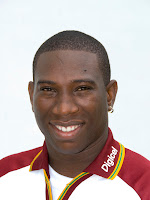 And he believes that the inclusion of left handed all rounder, Ryan Hinds, will significantly bolster the batting.

?Ryan was the best all rounder in the Caribbean for the last three or four years. He has scored a lot of runs and taken a lot of wickets. He is always a good man to have in your side,? reasoned Reifer, who now plays his regional cricket for the Combined Campuses and Colleges.

The twenty eight year old Hinds, a former captain of Barbados, has played 14 Tests and has a highest score of 84 against England in 2004. Reifer previously played First Class cricket for Barbados and was elevated to the West Indies team in the late 1990?s.

Prior to the Arnos Vale Digicel Test, the most recent of his four Test appearances was in 1999 against South Africa. He replaced regular captain, Chris Gayle, after the previously selected players took industrial action.

Reifer also said that, given the large number of Windies debutants (seven at Arnos Vale), there is an unfamiliarity with playing five day cricket.

?We exercised a bit of impatience. Most of the guys play four day cricket in our regional competition, so when you get into day five of a Test match, a lot of guys are not accustomed to that. I was discussing with the coach (John Dyson) that we have to find ways to get the guys to concentrate on day five, which is a very important day in Test cricket,? Reifer said.

And following his public call after the First Digicel Test for a Grenada pitch which offers more assistance to the faster bowlers, the captain expressed delight at what he saw.

?It?s good to see some grass on the (Grenada National Stadium) wicket. It?s hard, so let?s hope it has some bounce and some carry,? said Reifer.