YENDI GROWS ON DIGICEL RISING STARS – The 20-something is an accomplished, drop-dead gorgeous dancer who stretches herself to be the best she can be

Yendi Phillipps is, without a doubt, beauty with a purpose, and not only because she claimed that award in the 2007 Miss World competition in China.The 20-something is an accomplished, drop-dead gorgeous dancer who stretches herself to be the best she can be. Whether it?s an appearance to boost the profile of an event aiming to raise funds for a worthy cause or working at her creative summer camp, Yendi is a Jamaican gem. Since winning the 2007 Miss Jamaica World title she has become a darling of the Jamaican people. 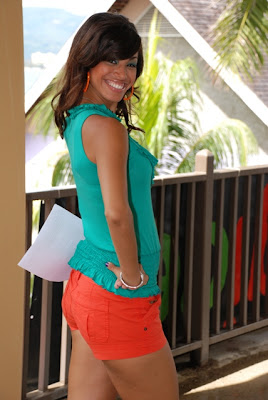 In 2008, when Denise Hunt resigned as host of Jamaica?s most popular television show, Digicel Rising Stars, the show?s producers looked Yendi?s way and she accepted. Since then she has been beamed into the homes of more than one million Jamaicans as the host of their favourite show.

?It’s been a great learning experience, more than anything else. With every episode I acquire more knowledge and it feels great to apply it and I feel myself growing as a person and as a media personality,? says the bubbling beauty.

Having been through the auditions, Phillipps is optimistic about the new season: ?It’s a great year for big voices. I heard more contestants belt out tunes than ever before so it’s definitely going be competitive. I am very excited about the show this year.

?I had to learn in front of the public last year which was pretty challenging but I feel a lot more comfortable and still feel excited every time I have to do the show or something related to it,? Phillipps said before revealing that it?s the energy of the live shows that she finds most exciting.

But which is more fun for Phillipps, Digicel Rising Stars or Miss Jamaica World? She says the two are ?…absolutely incomparable, but both are like my babies. I truly adore each role in its own way.?