The two thousand two hundred and fifty students of Excelsior High School in Kingston, were thrown into a state of shock and disbelief on Wednesday morning when West Indies captain, Chris Gayle, paid a visit to the school in order to present gifts and offer some words of advice to the students. 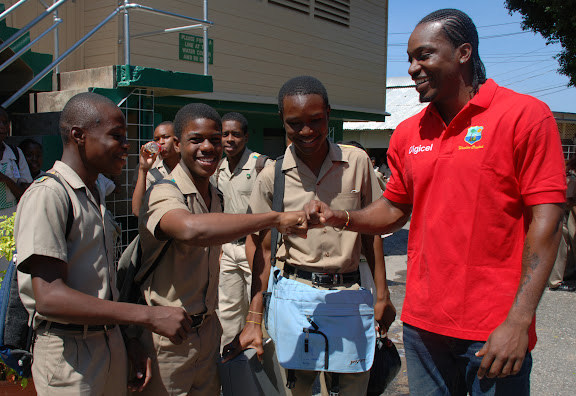 Gayle, a former Excelsior High student, told the excited students that it is of crucial importance for everyone to always remember where they came from and to give back as much as they can.

?It?s an honour and privilege to be back home. This is where it all started for me and I urge you to always remember Excelsior, no matter where you go in life and how successful you become, please come back and always give something back to the school – share your time and your moments,? Gayle said to the students who gathered to greet him. 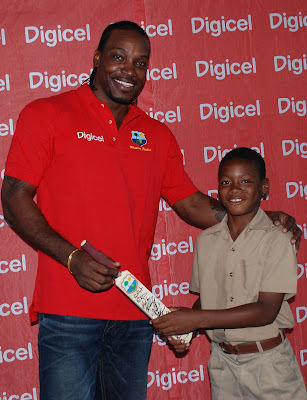 The West Indies captain and power-hitting opening batsman presented a full sized autographed bat – signed by the entire West Indies cricket team – to the principal of the school, Mr. Deanroy Bramfield, as well as several cricket bats, balls and stumps to the school?s cricket team.

The visit was coordinated by Digicel and Locker Room Sports provided the gift bags. The 29 year old Gayle urged the students to maintain a high level of discipline and to be obedient to their parents and teachers at all times.

?Keep your focus, whatever you want to achieve, you have to know it is possible, never let anyone bring you down and most importantly listen to your parents and be obedient to them,? Gayle advised before signing dozens of autographs and taking photographs with the ecstatic students.

Also accompanying Gayle on the visit was former world record holder for the most wickets and former West Indies off spinner, Lance Gibbs, who is a Digicel ambassador. Following his short speech, during which he advised students to emulate him as he said he was not a troublesome student (later verified by Mr. Bramfield), Gayle answered questions from the students and shared cricket tips with them, along with imparting general advice on how they should go about their lives and achieving their goals. 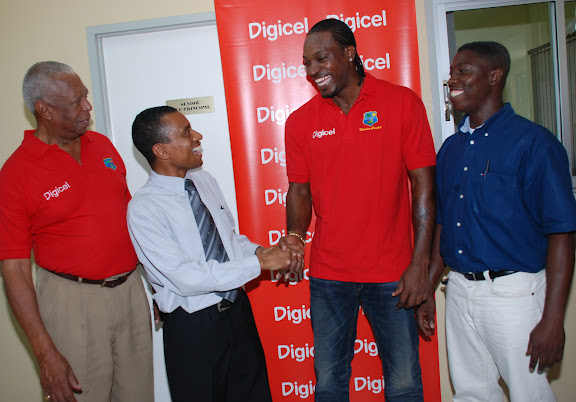 He was also asked by one student, Ronaldo Fletcher, to chronicle his rise to the West Indies team which Gayle patiently did, speaking at length about his days as a youth cricketer.

Fletcher, by no means a shy young man, boldly told the West Indies captain that he and his friends had devised a new dance move and demonstrated it. Fletcher then cheekily asked Gayle to use it as a celebratory move after taking a wicket in the Digicel ODI Series, which starts on Friday at Sabina Park. Gayle promised that he will use the dance move should he manage to capture any wickets.