International dancehall superstar, Marion Hall, better known as Lady Saw was a special guest at the coin toss for the first Digicel One Day International at Sabina Park. Though cutting a pretty picture as always, Lady Saw did not seem to bring any luck to home captain, Chris Gayle. He lost the toss to Mahendra Singh Dhoni who chose to have the West Indies field first.

Nevertheless the two Jamaicans were delighted to see each other, they hugged and chatted at length with Lady Saw also meeting Dhoni ? along with legendary commentator Tony Cozier who presented the toss on television.Lady Saw ? no stranger to cricket having performed in the Mound at Sabina Park for appreciative fans ? presented the coin for the toss to Gayle but Dhoni managed to call correctly. A prolific performer on stage, simply having to hand over the coin would have been among her snappier roles on camera; she however seemed to thoroughly enjoy being in the company of the two captains who took time out to take photographs with the dancehall icon. 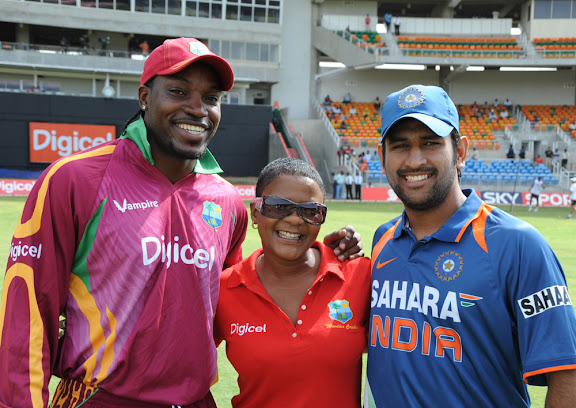 Now considered Jamaica?s top lady singer/DJ, Lady Saw was recently revealed as one of the faces of the Digicel-themed ?Divas of Dancehall? which honored the female artistes who have graced the internationally renowned Reggae Sumfest stage.

Lady Saw has appeared on the Tonight Show with Jay Leno and the Rosie O’Donnell Show. Popularly acknowledged as the queen of the dancehall, Saw has collaborated with Beenie Man, DJ Clue and pop artiste Vitamin C among dozens of others.