ROYAL NAVY WARSHIP HMS IRON DUKE ON ROUTE BACK TO THE CARIBBEAN: CAN SUB-LIEUTENANT WALES BE FAR BEHIND?

Royal Navy warship HMS Iron Duke is on its way back to the Caribbean for another six month deployment, only six months after returning to the UK from its successful deployment to the region last year. Once again the Ship?s primary role is to provide reassurance and support to the UK Overseas Territories, especially during the core hurricane season of August to October.

The Ship will also once again be part of the International Task Force hunting narcotics traffickers across the Caribbean. HMS Iron Duke sailed from Portsmouth Naval Base since Wednesday 17 June and will arrive in the region in early July.

While on a similar deployment last year, the Ship provided support to the Turks and Caicos and Cayman Islands in the aftermath of Hurricanes Ike and Gustav. She also seized almost a tonne of Cocaine. During this time Prince William spent 5 weeks on board familiarising himself with Royal Navy operations. 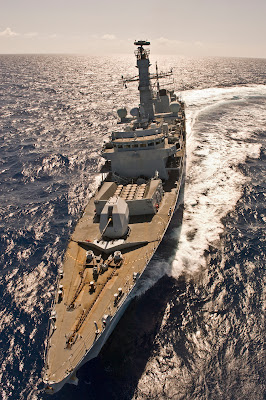 Iron Duke?s Commanding Officer, Commander Andrew Stacey said: ?I am delighted to be bringing HMS Iron Duke back to the Caribbean after the Ship?s highly successful work last year. My Ship?s Company and I are looking forward to making a real contribution supporting both the UK Overseas Territories and International Counter-Narcotics efforts in the region, re-asserting the Royal Navy and UK?s commitment to the region.?