At long last another of my Trailer items promised earlier this month… So who’d’ve thought Big Joe Turner would have assisted the cause of bringing back the train which ran from Belleplaine to Bridgetown?

“Shake, Rattle & Roll” is the story of Barbados’ short sojourn with trains from the late 19th to early 20th Century, the history of this tale earned an introduction from the Duke Of York. Illustrated by the multi-talented Patrick Foster, the slim book is a collaboration between Lenore Harney and John Syson. 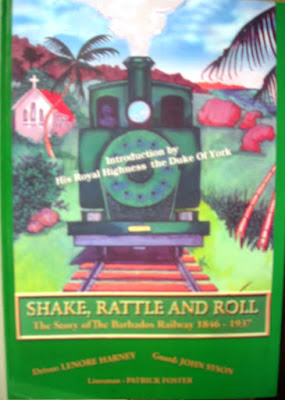 The lead-up to the actual railroad may seem a bit dry and stretched for some but when scanned carefully has intriguing references to even current Government practices – the Governor was appointed by Britain and the Governor selected the Council who worked with the Assembly which was selected only by those who had land!

{NB – Not the book here, but Bajan Reporter itself} Did you know the Governor General nowadays although represents the British Crown, is selected on the recommendation of the Prime Minister and even though the Governor General may have seeming authority… It is usually at the behest of the Prime Minister? Seldom does the G.G. make a call on their own![Back to review now] The actual meat of the tale is indeed at the end, “Puffing Billy” is what the plantation owners called the locomotives. With anecdotes of how guys would pass water and jump back on the vehicle or how obvious each carriage-level would assist the train if it derailed!3rd Class did the sweaty stuff, 2nd Class would supervise while First would give orders… Glad I wasn’t there, I may have caused a riot telling a First Class idiot to come and do and not shout – there are still twits like that today, you know!

State a problem but do nothing to solve it, don’t just sit there as if you are a gorillaphant, get up and be part of the solution you creep!

Anyhow, the book suggest with the current traffic situation getting more congested each day, it may not be such a bad idea to revive the “Puffing Billy” but moreso perhaps as a “Puffing Bullet” like the Japanese monorails – guess that would stop the fellows leaping out from one end and leaping back on at the other to urinate, eh? Check Cloister, DAYS or Pages for your copy!