Nadine Sutherland is a talented, powerful-sounding songstress whose voice is a sweet-escape into reggae music with lots of female flair and favour. Sutherland has been singing since she got her big break at nine years old by winning a national talent competition, and has used that experience to make her name one of the most recognisable in the Caribbean entertainment fraternity.

Sutherland has proven her mettle, and has more than two decades of hit singles to her credit, and the songbird has managed to stay on top of her game, still recording and performing locally and overseas. 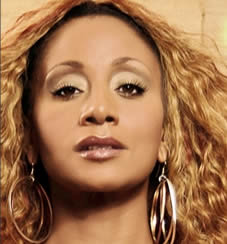 Her journey in the entertainment business can be described as a fast-paced roller-coaster ride. From winning that talent contest, to being signed by Bob Marley to the Tuff Gong record label as a pre-teen, recording and performing all over the world and most recently… launching a record label of her own and a new album, there?s no doubt that she?s left an indelible mark on the entertainment world.

She?s been making another mark on Jamaica. Over the last six years, she?s become known as the ?nice? and lone female judge on the most successful television series in the history of Jamaican television, Digicel Rising Stars.

?I?ve grown a whole lot,? Sutherland laughed as she talked about her experience as a judge on the show. But why does she come back every year?

?I enjoy it thoroughly?, she said. ?I am a singer, I still do my shows, I still perform, but this Digicel Rising Stars is now more than a job. It?s now an extension of me, and I?ve grown and learned so much in the last six years.

She continued: ?The show has allowed me to learn more about myself as a person, a singer, a critic and it?s just been an all round positive experience, and that?s what keeps me coming back.?

?Auditions were exciting, sometimes even breathtaking. We managed to unearth so much talent that sometimes I wonder how it is that Jamaica has never heard of this person, or seen this person.?

The ?mother-figure? Rising Stars judge also has high praises for the competition, and acknowledges its importance.

?Digicel Rising Stars is extremely important. Here is a vehicle for young talent to come out of obscurity, out of the wood work and cracks in Jamaica, to come out and shine. They might not become Billboard chart topping artistes, but this competition gives them some degree of fame. Something that can provide them with employment and earning potential,? Sutherland maintained.