A top regional official in Agriculture referred to a grant to Nevis farmers from a Canadian funding agency as an effort in line with the mandate of the Inter-American Institute for Cooperation (IICA) to assist member states in the development of agriculture. 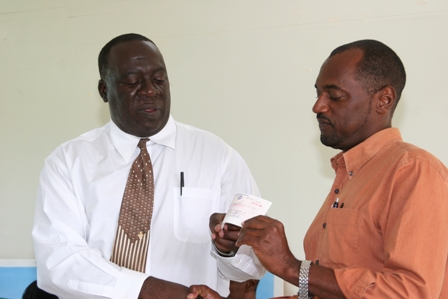 Director of the Inter-American Institute for Cooperation on Agriculture (IICA) Director and a former Director of Agriculture on Nevis Mr. Augustine Merchant, made the comment on Monday when he handed over a $41,300 cheque from the Canadian Fund for Local Initiatives (CFNI) to the Nevis Island Administration?s Ministry of Agriculture for the Nevis Growers Cooperative

?Coincidentally, Canada which is one of the 34 member states of IICA is the one donating this grant today and so it?s one member state basically assisting another state and we at IICA are very pleased to be the conduit of this collaboration,? he said.

The IICA official further explained that his organisation was no stranger to the donations of that nature. The Agriculture Organisation had been in the Federation of St. Kitts and Nevis for the past 17 years and in the hemisphere for 67 years.

He said it was an Institute with a good track record that had assisted the Federation in a number of ways.

Mr. Merchant made clear the basis for the donation to the Nevis Growers.

?Last year just prior to Hurricane Omar, we had Ms. Dian Cummins who is the person responsible for projects at CFNI. She visited St. Kitts and Nevis to view some of the projects they were funding. Unfortunately, on her way back she got stuck in Antigua and she called me and asked if the farmers had suffered any damage and indicated that they would be quite willing to provide a stimulus package,? he said. 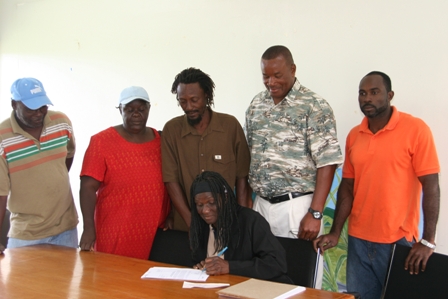 The IICA Official said though the grant had been a long time coming, he was hopeful that the farmers would ensure maximum benefits from the gift.

According to Mr. Merchant, the idea behind the grant was to make certain that whatever loss sustained by the passage of Omar, it would offset some of the cost and to help the agriculture sector get back on track.

?I think all of us know that this is a very important sector of the NIA and so it is incumbent upon you to ensure that you use this to the fullest. We at IICA would be willing to assist in any other way,? he said.

The donation would be used for the procurement of seeds, chemicals and an 8x10x15 walk in chill room. 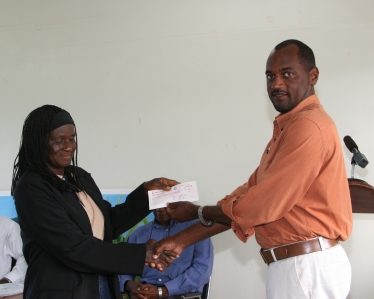 Meantime, President of the Nevis Growers Cooperative Mrs. Emontine Thompson thanked those who facilitated the grant to her organisation.

She said though they were grateful to God for their person safety during the storm it was not easy having lost crops they had planted in hope of a pay day.

Mrs. Thompson noted that the grant was not the first from CFNI and thanked the Organisation for its invaluable long term support.

She also pointed to the longevity of the Cooperative and said though they had many hurdles from its inception in 1991 with nine farmers, membership had grown. The body became a registered Cooperative in 2003 and remained together as a group, whose models had been copied throughout the region.

Other remarks came from Permanent Secretary in the Ministry of Agriculture Dr. Kelvin Daly and Director of Agriculture on Nevis Mr. Keithley Amory. The ceremony was chaired by the Cooperative?s Vice President Mr. Zenric Hanley.