My thanks to Media-Imran (He used to supply all my Stanford Twenty-20 releases, intriguingly, that site is still running – BTW) for this tidbit from Kaieteur News recently…

Guyana, as you know, is the land of giants. But you need not travel to the bush to see the giants. You can see them right in our city. 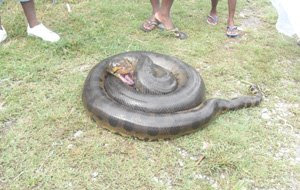 Take for example this 16 foot anaconda which was caught in Georgetown (about 10 minutes away from Bourda) by a man with his bare hands! This anaconda, as you will read in the article, ate a caiman (which is an alligator) and can easily swallow a fully grown human given its size.

I think this one might be larger than the one in the Georgetown Zoo.

I know you will all be clamouring to come to Guyana now so on each of your next trip here I will personally take you on a tour to the spot where this anaconda was caught. Be sure to check out the attached photo which shows the man who caught it holding the head.

You got to love him in his Obama cap, nonchalantly holding snake while his cellphone is in his mouth and the fact that he risked his life to catch it HOPING that someone would buy it.

Residents of Sophia yesterday came up with a huge catch, a giant anaconda or ?camoudie? which was pulled from the Lamaha Canal, popularly called the ?Blacka?.

The giant reptile, weighing about 200 pounds and about 16 feet in length, was caught by Junior Douglas with some help from his friends. According to report, the anaconda had earlier swallowed a large caiman, which rendered him almost immobile, making it a little easier for Douglas to catch. 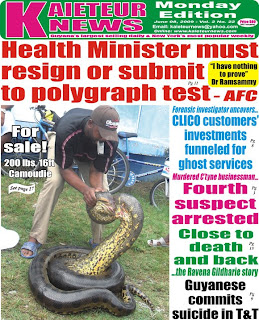 According to Douglas, earlier yesterday he had seen the caiman lying on its back and it appeared to be dead. He decided to pass by the location a little later, but the caiman had disappeared, and it was then he saw the ?camoudie?, which he was certain had devoured it.

Douglas said, after realizing that the reptile had just eaten a huge meal, and would pose no danger to him, he swam over to the other side of the canal where it was nestled and grabbed it by its tail.

However, the serpent, in a desperate attempt to escape, pulled Douglas into the canal, but the young man was not going to let the opportunity of landing the large catch slip away. The camoudie became entangled in some vines that ran along the canal?s edge, and this gave Douglas the opportunity to slip a piece of rope around it and pull it to land.

He said that the size of the reptile startled him. After a brief struggle, the reptile regurgitated the Caiman that it had earlier swallowed and still it was the largest ?camoudie? that Douglas had ever laid his eyes on.

He eventually transported it by taxi to the Kitty Seawall, where passersby stared in amazement at the sheer size of the creature. Douglas was hoping that someone was interested in purchasing the reptile, but up to late yesterday there was no buyer.