{NB – Original release sent after fact – this was sent by popular artist/blogger Annalee Davis, who has following background}

For those of you interested in the evolving story surrounding the working people of the south of Trinidad who are trying to stand up against the building of the Alutrint Smelter in their community, see the press release below. This is a community that has traditionally supported the ruling PNM – their sense of betrayal is evident. Feel free to forward.

[It is] understand Patrick Manning [was] planning to come La Brea [June 10, 2009] to turn the sod for Alutrint’s power plant.

Protests involving the villages of Sobo, Vance River, Vessigny, and Union are growing. The citizens involved are against the building of the Alutrint Smelter. We now have the information that Alutrint has been hiding since February 2008 on the health risks of the smelter and the facts on such things as the loss of our beach that has been hidden from us since 2005.

Please note protests that started about two weeks ago were for jobs and fair relocation practices. However, our protest is by villagers being left to live near this smelter and we do not want it! The residents scheduled for relocation and the residents being left behind are standing together.

Those who want jobs in Alutrint have a separate platform. However, we sympathise with them as we have all been fooled that there would be safe jobs for our people. Instead we have hundreds of Chinese roaming about our backyards.

The representatives on many village councils and in the Parliament are representing Alutrint not us. They are trying to shove the smelter down our throat to silence us. This is why we are in the streets, we are representing ourselves.

Today the police discharged a firearm in the air in the midst of children in Union Village. Our protest is non-violent. We will not back down.

The State wants the people of Trinidad to believe that only a handful of residents of La Brea do not want the smelter. This is not true. For example, last week when C-news came to do a feature on La Brea they were only taken to La Brea Village where some persons told them they want the smelter. We waited for them but they never came to our villages. Please note the La Brea area consists of many villages. It is the some 4000 plus residents of Sobo, Vance River, Union, and Vessigny villages that have to be tested every two years for cancer. The residents of La Brea Village do not have to be tested. They cannot speak for us! We speak for ourselves. We do not accept this hurtful smelter.

The State is trying to create the impression that all is well and that the smelter is moving ahead at pace and is unstoppable. They want the people of Trinidad to believe we cannot stop it. This is not true. There is no plant on the ground yet. No plant will go on that ground.

We are calling on right minded citizens of Trinidad to support our call for justice and fairness. This is not just about the environment. We will continue our non-violent protests tomorrow and as long as it takes to safeguard our health and community. 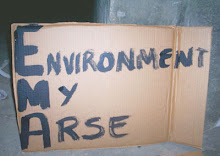 Affected residents who are among those that have to be tested biannually for cancer stood with supporters from wider Trinidad outside the entrance to the Alutrint smelter complex in peaceful protest today. We called for explanations from Mr. Manning, Alutrint, and the EMA. Instead of getting explanations we watched as our fellow Trinidadians and foreigners, under the protection of the police, drove up in Mercedes Benz, BMWs, and other expensive sport utility vehicles into the compound to turn the sod for the machinery that will destroy our lives and communities. We were not invited to the ceremony. Not even members of Village Councils were invited. The so called ?beneficiary community? was not supposed to be there. It cannot be there, because a beneficiary community does not exist. It is a myth.

The Prime Minister, Mr. Patrick Manning passed us on his way in without acknowledgement. We couldn?t believe he would treat us like that. We thought he might have stopped to reassure us at least that someone would talk to us. We were hurt. Some of the women broke down crying because despite all that has been done to us we still had some feeling deep within us that he would not treat us this way. After all he is our leader. We put him there with our precious votes. Mr. Manning and his party can never say that whenever they need us, the majority people of La Brea don?t stand up and support them.

After the ceremony started we discussed going into the proceedings. However, we were told by one of Mr. Manning?s representatives that he would stop and address the crowd on the way out. We believed. He did not stop. Our Member of Parliament, Mr. Fitzgerald Jeffrey, also passed without acknowledgement on his way in. Instead of coming back out in his vehicle, he sent out his vehicle with his brother and tried to sneak out in the back seat of a pick-up truck. We tried to stop the truck so he would come out and talk to us. One of our brothers, Mr. David Sinclair, of Sobo Village was arrested after boarding the tray of the vehicle. Mr. Jeffrey snuck away.

During the protest the State bussed in workers to stand as Pro-Smelter people. The public tax payer?s funds were being used to pretend that there are actually real living people who want to live near the death smelter. We welcomed these ?so- called? pro-smelter people and offered for them to take the microphone and speak on why they support the smelter. However, no one from among them came forward. After all, they couldn?t. They were just victims of a very bad work day.

During our meeting, an individual who had been with Mr. Manning?s team approached some of us from Square Deal, one of the communities that have serious grievances regarding our involuntary relocation. He said he had been in discussion with the big ones and he offered to set up a meeting for some people in our group to talk to the authorities to resolve our issues. However, he said that this meeting would have to be in Port of Spain because it would take us into a neutral space to dialogue. He wanted the names and contacts of the residents leading the protest so he could contact us. We asked him to make his offer at the microphone in a transparent and public space but he did not do so. We had written to Alutrint over a week ago asking for a transparent public and properly recorded meeting. They still have not responded to our letter. Given the character we have seen of this company so far, we are not surprised that a political operative would have tried to trick and divide us.

We the residents stand united across villages, ethnicity, and customary political party loyalties. Tricks and tactics will not make us put anything before our health and our children?s future. We wish to thank those people who came from different parts of Trinidad to stand with us. We will continue our protest and call for transparency. We are calling on all right minded citizens to help us save our lives and communities and, equally important, to save our country from this race to the bottom.