Digicel announced details of their regional broadcast sponsorship of the FIFA World Cup 2010.

Broadcast live, as live and on round-up programmes on terrestrial and cable TV across the Caribbean – football fans can watch up to 274 football matches over the next 13 months, starting with the FIFA Confederations Cup which kicks off on June 14th 2009, right up to the much-anticipated FIFA World Cup 2010 which is taking place next summer in South Africa. Digicel has been able to secure this thanks to an exclusive regional deal with IMC/Sportsmax.

FIFA Vice-President and CONCACAF and CFU President, Jack Warner, said of the announcement: ?I am delighted that Digicel has come on board to bring live coverage of the world?s most exciting football event to fans across the region. Football is the most popular sport in this region, and as the biggest mobile operator and supporter of football across the Caribbean, it is only fitting that Digicel should come together with FIFA to bring bigger, better football to the fans.

He continues: ?Not only will Caribbean fans be able to watch the FIFA World Cup, but this deal also allows them to follow the South American World Cup Qualifiers, the FIFA Confederations Cup, the FIFA Under 17 World Cup and the FIFA Under 20 World Cup.? 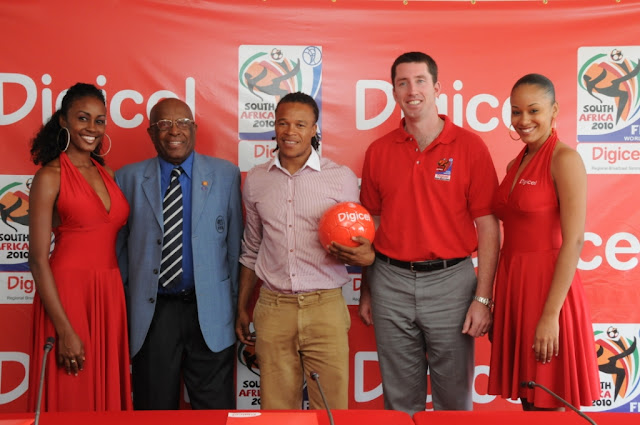 Digicel Group Marketing Director, Kieran Foley, said: ?The FIFA World Cup 2010 is the biggest football tournament in the world. As the biggest investor in football in the Caribbean and Central America, Digicel has listened to what our customers want. Our customers are so passionate about this tournament ? we are delighted to be bringing live televised coverage of it to the people of the Caribbean.

?As such, we will be developing a number of exciting promotions which will take place from now, through the build up to ? and right throughout – the FIFA World Cup. This means our customers will have access to fantastic interactive content in terms of football entertainment and information.?

SportsMax Limited President & CEO, Oliver Mcintosh, said: ?We?re delighted with this deal. Digicel is the primary supporter of football across the region and ? together with IMC, SportsMax and broadcasters across the region ? will be bringing these action-packed football events to more people in the Caribbean than ever before. The countdown to FIFA World Cup 2010 in South Africa is on ? and the excitement is going to build and build over the next thirteen months.?

As well as sponsoring 16 national football associations, federations and Digicel international matches in the Caribbean and Central America, Digicel is the main sponsor of the Digicel Caribbean Championships and the Copa de Naciones Digicel ? which are the sole qualifying tournaments for the CONCACAF Gold Cup.

Digicel also runs the Digicel Kick Start Clinics which are currently in their second year. The Kick Start Clinics are currently taking place for Under 16 footballers in six Caribbean and four Central American countries. Former England and Liverpool football legend, John Barnes, is Head Coach of the Digicel Kick Start Clinics and will select eight of the most talented Caribbean players to spend one week training with Sunderland AFC, and six of the most talented Central American footballers to spend one week training with Liverpool AFC.