Barbadian Ad Agencies: Why do they take so long to pay? Bills are still piling up as they offer excuses!

I want to thank Carla Springer in a rant on Facebook for inspiring me with this one… It’ll put me in a ton of hot water with a good few agencies for my daring to say so, but I am not doing it for me alone, I speak this on behalf of all voice or modelling talent who wait to the point a bailiff at your door pounding when your rightful fee is still in the coffers of the agency who hired you in the first place! (That last part happened when Peta Alleyne was in a Big Boy garbage bag commercial, she did not know now-defunct Bds branch of McCann-Erickson ran the commercial for radio and TV in Port Of Spain, until a TT soccer team arrive in Barbados, see her and holler “Big Boy! Big Boy!“ She asked and then learned – Talent Barbados successfully argued for more money for her, but then they stopped using her for a while! Talent Barbados stepped in again...)

One of my contentions – even now, is that residuals were and continue to be ridiculous – if a spot is three years old then you get HALF what originally paid for, in the UK or USA you can almost send your kids to University off of residuals. I think 50% of original fee should be offered at six months, 25% after 18 months then full fee again at 36 months, anything longer to be negotiated between the agency and the talent directly! After all, the agency charged more than that in the first place, right? I am sure if the campaign is successful, then the client will return too…

I have gotten a residual once to my recollection, I think it was Kirpalani’s and I received the CEO-like figure of Ninety Dollars and no cents, whoop de doo!

Anyhow “Talent Barbados” dropped dead, then Ad Agencies started paying back worse than the Mafia with a vendetta! A rep of the late McCann had wanted to openly pull a fast one on me with some multi-spots: get a discount on ten commercials, but I held on for full fee, they were threatening to ban me until I called the name of Talent Barbados then it was “Heh, we were only kidding.”
But when Tal-Bds was fairly disbanded, shortly after I happened to be 12 minutes late for a commercial to be recorded at Gray Lizard Studios when they were in Belleville and this b*tch deducts %25 of my fee! I kept quiet as there was no Tal-Bds, I was also unemployed at the time and needed the money – but now? I’d tell her where she could osculate… Thing is, that kind of “Late Fee” reduction has never happened with me nor anyone else since, I am sure it was payback for aligning with Tal-Bds.

“WAITING FOR APPROVAL? BUT IT’S ON RADIO (OR TV)!“ 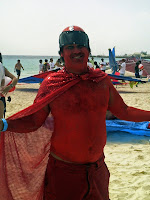 When you do work for Red Advertising, they pay fairly quickly (In fact, during October 2008 I asked if I could my fee quicker to have Birthday mad-money and they had it done the next day)… Sassman Publications when you do an article for “Signature” they pay half after submission and half on publication.

Most agencies have the spot go on tv or radio, which means automatic approval, but call the agency and try and tell them your account is overdraw or your hire purchase is an arrears… “Well, we haven’t billed the client yet!” Here’s the most famous one – “You want me to get the money from where? This agency’s accounts are dry!” I relayed that to one of that particular agency’s directors, got my cheque the same day and — ? Did not hear from them for 18 months, LOL!

The reality is this, if the Talent did not need the extra money then we would not either bother doing voiceovers or or if we missed announcing we would not bother them for the fee – since voicing a spot is pleasure enough, right?
BUT WE NEED THE MONEY, ESPECIALLY THESE DAYS! I cannot walk into Light & Power and say; “I will pay for the electricity when it finished powering my laptop to send and receive e-mails.” I cannot go to a supermarket and say; “When the food is digested then restored to the sewerage system I will then pay for my groceries.” I would get laugh at so effin’ bad!

PROMISES CANNOT HOLD UP MY BANK ACCOUNT, CASH DOES – OVERSEAS OR LOCAL! I did a spot in February, and that agency says “We’re supposed to pay in May.” I asked if their salaries are like that… So I got my fee for then! I am now waiting for work done in April, while the spots I did are blistering the radio stations right now, if I was to get nasty, I wonder how many decades before I saw more business?

Look, I don’t know if they hold the money for compound interest or what… I could never understand why not give half now and half on airing? I believe it is time for all models and speakers to get together again and revise the payment scheme for commercials in Barbados!

What is ironic is the very folk who make these commercials a success, are the ones who get dissed so badly!