The Digicel-sponsored West Indies team below-par tour of England continued on Sunday as it was beaten by six wickets with 14 overs to spare by the hosts in the second one-day international at Bristol. The visitors must now win Tuesday?s third and final one-dayer at Birmingham to square the series and salvage something from the brief visit.

The West Indies team was skittled for 160 all out off just 38.3 overs as only all-rounder Dwayne Bravo (50), captain Chris Gayle (31) and Shivnarine Chanderpaul (27) offered any meaningful contributions. Fast bowler Stuart Broad carved through the top order with his pace and control and finished with four for 46.

All-rounder Paul Collingwood earned three crucial middle order scalps (three for 16) with wicket-to-wicket medium-paced bowling. England was never in danger as it pursued the modest target and Collingwood sewed up the Man of the Match award with an unbeaten 47 as he guided England to 161 for four off 36 overs.

The weather could not be used as an excuse this time as bright sunshine, blue skies and warm conditions greeted the Caribbean side. But the pitch did provide a bit of encouragement for England and the West Indian batsmen were unable to find a proper response.

Sent in, Broad floored the tourists with wickets in his first two overs as they sunk to seven for two. Lendl Simmons – his weakness for falling across his stumps increasingly being seized upon – was lbw playing across the line. Ramnaresh Sarwan feathered an edge to the wicket-keeper as he drove airily outside off stump. 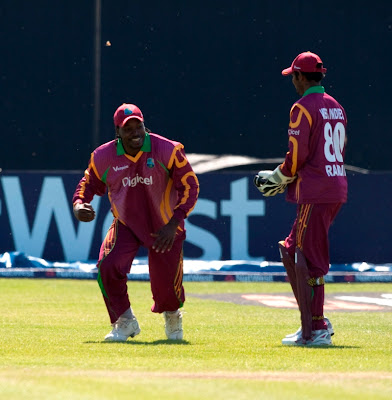 Gayle, in his 200th one-dayer, provided an entertaining counter-attack but he fell just as the momentum began to shift. The powerful left-hander deposited the first ball from off-spinner Graeme Swann several rows back at long-on for six but tried to do the same to a flatter, straighter one next delivery and was bowled off his pads. The Jamaican hit three fours and two sixes off 28 balls.

Chanderpaul and Bravo continued to revitalize the innings with a fourth wicket stand of 63 in 13 overs. But once Chanderpaul, after hitting three fours off 59 balls, skied an ugly pull off Tim Bresnan to first slip, the last seven wickets tumbled for 53 runs and 69 balls were left unused.

Bravo played with typically unfussed exuberance and collected a fine half century before he perished in Collingwood?s first over. The right-hander, who hit six fours and a six off 58 balls in his first match on tour, drove loosely at a slower ball and was bowled through the huge gap between bat and pad.

The lower order could not bail out their more accomplished team-mates at the top and only Darren Sammy (13 not out) managed double figures.

Collingwood also removed Denesh Ramdin, plumb lbw playing across the line, and Kieron Pollard, bowled swinging for the fences. Jerome Taylor?s run out summed up the West Indies? day as he stroked a ball straight to extra cover and set off for a suicidal single. He was run out by several yards when Sammy sent him back.

Broad wrapped up the innings with the contrasting wickets of Sulieman Benn and Ravi Rampaul. Benn tried to play strokes as if he were a top three batsman and ended up skewing a pull into the leg side. Rampaul, more intent on survival, also perished to a short ball as he half-fended, half-ducked and gloved a catch to slip.

Taylor removed captain Andrew Strauss to a top-edged pull at 31 for one just before the break for lunch. Sammy and Bravo added the wickets of Matt Prior (11) and Ravi Bopara (43) as England fell to 81 for three. Prior steered Sammy to slip where Gayle juggled before clinging on while Bopara came too far across his stumps and was lbw. 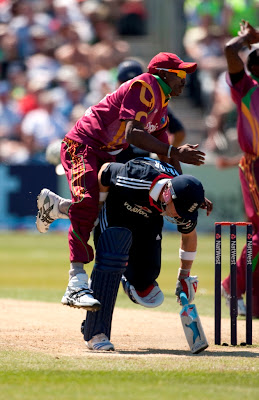 But that was as close as the West Indies got as Collingwood and Owais Shah added 76 for the fourth wicket to seal the win. Shah, not for the first time, ran himself out just before the end as Pollard made up for an earlier dropped catch and a misfield that went for four with a brilliant diving stop and direct hit from backward point.

Eoin Morgan, in his first ODI for England after playing 23 for Ireland, hit the winning runs but not before he was misstumped by Ramdin off Benn with one needed.