THE WAORANI – Fierce defenders of the Ecuadorian Amazon: #6 in a series from Activist Damon Gerard Corrie

I first met Manuella Omari Ima Omene of the much feared Waorani Tribal Nation of the Ecuadorian Amazon in 2008, we were together for what was the first year of the training course sponsored by Tribal Link and Project Access (Global Capacity Building for Indigenous Peoples), a year later we are together again for the second year of training and our second attendance at the United Nations Permanent Forum on Indigenous Peoples – May 18-29th 2009 at the United Nations headquarters in New York City; USA. The Waorani People number about 2,500 persons and inhabit a traditional territory of 700,000 hectares spread over 3 Amazonian provinces in the Republic of Ecuador, I decided on this trip to take the time to learn more about her as a person, without the invaluable translation skills of my Andean Ecuadorean brother Johnson Cerda – my interview would not have been possible; my lack of fluency in Spanish (like my father) never ceases to dismay me. Now that I know more about Manuella, I’m impressed beyond my wildest expectations, the old adage ‘never judge a book by it’s cover‘ was written specifically for people like her I believe, she is very soft-spoken, and under 5 feet tall (like my own Arawak wife), but Manuella is the closest to the female Amazon warrior of Greek mythology that I have ever had the honor of befriending. 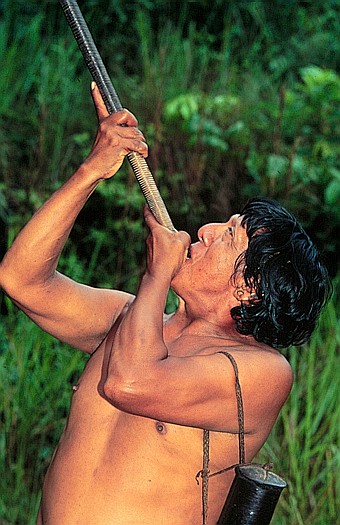 She is the daughter of ailing hereditary Chief Cogue of the Waorani, so in western terms that makes her a princess of her tribe; even though the word ‘princess‘ or ‘prince‘ does not exist in any Amazonian Indian language that I am aware of – we are simply known as the son or daughter of the (Hereditary) Chief, but among our respective peoples we have a good measure of respect and influence among traditionalists (note I said ‘Traditionalists‘). The still much feared War Chiefs Kemperi and Babeh who were active in former years are her uncles, and these two great warriors are famous in Ecuador for the amount of intruders into Waorani territory that the two of them have personally killed. Manuella casually explained the reasons for the killings to me thus;- “In our traditional law anyone who enters our territory to destroy it must be killed“. Manuella herself personally met with Ecuadorian President Rafael Correia in 2008 and told him “Mr. President, If you send oil workers into Waorani Territory, my people will kill all of them, and then who will be responsible for that situation? The Waorani? or you?“ President Correia replied to her “Well I certainly don’t want anyone to go there and get killed“. The proposed oil exploration incursion by Petro Ecuador deeper into Waorani territory was shelved. Did I mention that not even the Ecuadorian Police and Military risk patrolling in the Waorani territory? The diminutive Manuella also stopped the Brazilian Oil Giant Petro Bras from doing any exploration into her people’s territory, this was not a fight spearheaded by the men, believe it or not it was the Waorani Women’s group led by Manuella who met with the President and warned him of the consequences of his intended actions – and who stood up to a corporate behemoth and achieved these peaceful victories! As a man I felt quite embarrassed to hear that the uphill struggle is one being tenaciously fought without pause by the women in the Waorani tribe, and Manuella agreed that it should not be this way, but in the absence of their men shouldering their responsibility – these determined women are capably filling the void. I am sure the men will be only too willing to spear or rain arrows on any intruders into their territory, but it is the women who have taken the fight into a more palatable (albeit frustrating at times) arena of passive resistance. Very few Waorani want to have anything to do with the outside world if truth be known, Manuella for example is the only Waorani with an e-mail address, and it takes her 7 days to travel one-way from her jungle home to the nearest town of Puyo to check her e-mail. Most of the Waorani live in about 32 small villages of under 100 persons each, and all of those settlements in the center of their territory desire to remain un-contacted, caring not to fall into the trap of a slow cultural death that generally comes with ‘assimilation’ and ‘westernization‘ (often dishonestly peddled as ‘progress‘ and ‘development‘ by it’s cunning salesmen).
Manuella would doubtless prefer the simple joy of traditional life and ignore the rest of the world, were it not for the constant encroachment by foreigners – who wait like greedy barbarians at their proverbial forested ‘gates‘ with covetous eyes on the pristine forests and sub-surface mineral wealth of the Waorani homeland.

Manuella will hold a workshop in every village of her people when she returns home, and share everything she has learned with them, encouraging them to learn all that she has – with a view to joining her in defense of their people.

Manuella wishes to help her people my developing a cottage industry for their unique handcrafts, and these beautiful items are available for perusal at www.mujeres.org – this is to help the Waorani women’s group self-finance their just cause; and is undertaken out of the groups office in the town of Puyo… I guess you could call it the ‘Tribal Office of the Waorani‘.

The Waorani’s immediate needs – ones which are easily accommodated by kindhearted donors – if they can be located, are to obtain at least 1 computer for the tribe, Manuella knows how to use the technology and is eager to teach others so it can be used as a tool in their struggle, and the only other item requested is a radio set – so that communication between the sole Waorani office in Puyo and the villages in the Waorani territory will not require a 7 day journey merely to transfer news…and this will become obsolete in this 21st century – as it should be!

It has been my great honor to befriend Manuella, to write these few words about her, and to welcome the Waorani people into the worldwide Pan-Tribal Confederacy of Indigenous Tribal Nations.