Before carrying out his installation duties, His Excellency Dr. Martens noted that Germany and St. Kitts and Nevis have enjoyed wonderful relations over the years. He mentioned a March 06 meeting, during which the decision was made to collaborate on a renewable energy project. The German Ambassador to St. Kitts and Nevis said that he was able to bring to the Federation, for advisory purposes, the Head of a very large German Development in the Caribbean.

He mentioned that there had been senior officials of the Electricity Department of St. Kitts and NEVLEC of Nevis who had received capacity building and transfer of technology training in Germany, courtesy of the German government. The German Ambassador mentioned that assistance had also been provided to the wind energy project taking place in St. Kitts. 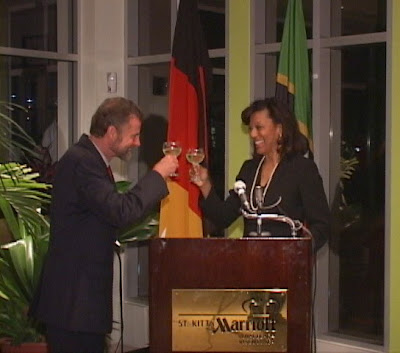 Ambassador Dr. Martens also referred to basketball and football training which took place in Germany, the most recent offers being given to Dave Connor and Isaiah Morris for basketball and football training respectively. He also made mention of a diplomatic course which had been attended by Tensia Grey. His Excellency Dr. Martens revealed that the Prime Minister Honourable Dr. Denzil Douglas had been impressed with Ms. Grey?s work ethic and had already identified prospective assignments.

The German Ambassador revealed that St. Kitts and Nevis made a commitment to support Germany?s candidature for a non-permanent seat on the United Nations (UN) Security Counsel which would become available in 2011 and 2012. In response, Her Excellency Denise Parris-Mertins thanked all who assisted in preparing the evenings activities and made special mention of her husband, whom she said encouraged her to take the diplomatic position.

She said that she was truly honoured to accept the position and thanked all for their support and expressed her intention to contribute to better cooperation between St. Kitts and Germany. She said it would be a pleasure for her to assist Germans residing in the Federation with any queries that they might have and to assist Kittitians and Nevisians with information about Germany including higher education as well as special training in business development and tourism.

Honarary Consul Parris-Mertins replaces Mr. Reginald Kawaja who retired from the position several years ago. She brings to the diplomatic position a wealth of experience including being a former Pan American Health Organisation consultant, a UN Framework Convention on Climate Change consultant, and a UNICEF employee serving in New York, Kenya and Malawi.