Impressive, creative and fascinating were words that echoed throughout the St. Kitts Room at the Marriott Resort last Friday, when participants of the Potters? Class of 2009 proudly exhibited products transformed from ?clay into something of value.? 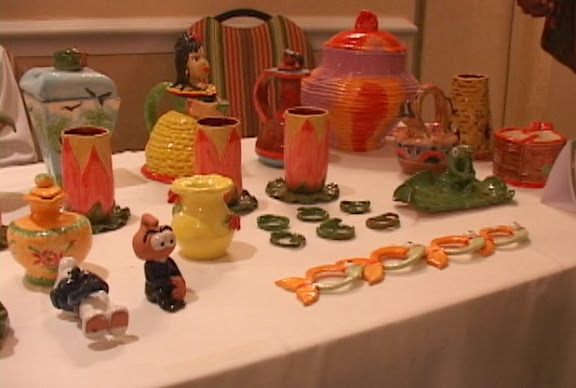 The items on display were created during a 13-week course organized by the Craft House with sponsorship from the Basic Needs Trust Fund (BNTF). The participants received certificates from facilitator Adam Azaire of St. Lucia, a regionally renowned ceramist. Azaire noted how proud he was of the participants.?My 13 weeks at the Craft House was very exciting,? he said. ?It was a challenge ? but most of all there was a camaraderie that developed amongst us that I really enjoyed.??This is not the end. This is just the beginning of a friendship,? he stressed, while trying to fight back tears. ?I?m not very far away so call me, email, or send a text message if you have any questions.? 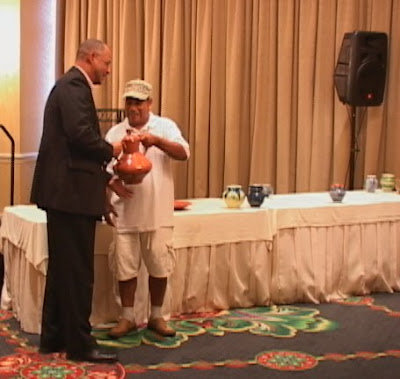 Mr. Azaire told Minister of State for Culture, Honourable Richard Skerritt, that this workshop was one of the best he has ever been associated with. Minister Skerritt, who holds responsibility for the Craft House, recalled how impressed he was during a visit to the facility a few days before the graduation and certification ceremony.“[Permanent Secretary Lloyd] Lazar will tell you that when I finished looking at the display, I said to him that ? I have to get the Prime Minister here to see this,” he recounted. ?We called the Prime Minister?s Office and it was about 6 o?clock in the afternoon. I understand he got there in about half an hour. After he saw the quality of the work he asked me when was the closing ceremony because he wanted to be there to congratulate you ? because like me, he was fascinated with the talent that was on display through your creativity.?Unfortunately the ceremony coincided with an OECS Heads of Government Meeting held in Tortola, which the Honourable Prime Minister previously committed to attend.The Minister of State credited the course participants for persevering through the sessions which were held three times daily to ensure students can attend on a flexible, convenient schedule. He added that the project marked the continuing fulfillment of Government?s capacity building strategy.?Government is about empowering people,? he stated. ?Empowering people involves helping them to help themselves. This project ? has helped you develop skills and to know yourself and to develop the confidence and the courage to now trod forward as business people.?Minister Skerritt added that the pottery skill can provide ?many hours of enjoyment in the future and can help persons to become a lot more positive and self confident.?The sense of self-assuredness seems to have resonated with the Potter?s Class of 2009. Most have pledged to continue using the skill while others have begun exploring ways of income generation.