Geothermal supply will be converted into an economic product for Nevis

Legal and financial barriers have been removed and Nevis? indigenous geothermal resource could now be converted into an economic product and service for the people of Nevis. Chairman of the Nevis Electricity Company Board of Directors Mr. Ernie Stapleton shared that view on Tuesday during the historic signing ceremony of Geothermal Contract and Power Purchase Agreement with developers West Indies Nevis Ltd. at the Netball Complex in Charlestown.He said there was a strong political will and support for geothermal development on the island and despite the world economic recession, there was much optimism for economic growth and prosperity of the island largely due to the probable success of the Nevis Geothermal Project.

Mr. Powell who is also the Permanent Secretary in the Ministry of Natural Resource and the Environment and a member of the negotiating team commended his fellow team members for their dedication, commitment and persistence to ensure that Nevis had arrived at that important moment in its history.

Other members of the Negotiation Team which was established in August 2008 are: Legal Advisor in the NIA Mr. Patrice Nisbett, Permanent Secretary in the Ministry of Finance Mr. Laurie Lawrence, General Manager of NEVLEC Mr. Cartwright Farrell, Renewable Energy Legal Expert and Consultant, USA Mr. A. John Armstrong, and Queens Counsel from the United Kingdom Mr. Tom. Sharpe.

He also pointed to the partnerships

the Ministry had forged on its path of geothermal development.

?The Ministry has established a network of partners in the regional and global community that have provided and continue to provide free technical assistance to the Nevis Island Administration. 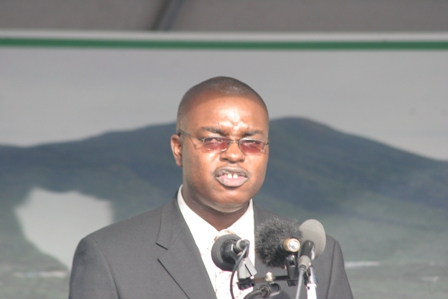 ?This is no accident. I do believe that it is because we have presented a clear vision and mission for the development of the renewable energy sector on Nevis and have been aggressive in implementing it. They have all bought into the NIA renewable energy development thrust,? he said.