Can superhumans quicken Armageddon? A look at John Ridley’s “Those Who Walk In Darkness”

There seems to be a desire – although somewhat trepidatious – to have the barriers between fantasy and reality blur when it comes to superheroes as I knew it when younger or what is called metahuman or even metanormal in this new sub-genre of science fiction.

What would happen if these Meta-Folk were indeed real? Would it be that bad? Titanic battles crushing buildings, landmarks and perhaps small countries like how kids grind ants in the playground while playing marbles? More rubble than Kandahar or Baghdad under the aegis of “Dubya” Bush? Or a panacea where pestilence, disease, crimes and wars seldom dared to peek out of their exile?

For “The Incredibles” it was not a desire to prevent City-scale damages and catastrophes so much as ordinary people wanting to decide their own destiny as in the example of a wannabe suicide suing for the right to die! 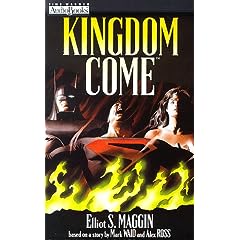 Whereas Earth-X by Marvel – imagined an opposing view, what if superheroes were no longer needed if EVERYONE has superpowers? Whereas DC’s Kingdom Come imagined that superheroes had eradicated villains one way or another – defeat, retirement, incarceration and in some cases, death… All that were left are descendants of heroes and villains arguing for turf like the Jets or The Sharks. When a whole state evaporates after a botched titanic bounty hunt by over-eager metahumans, Superman resumes active duty to control the ultra-chaos, or can he? With the cinematic version of Watchmen as crafted by Zack “300” Snyder, he adapts a 12-issue graphic novel [alias for fancy adult Comic-Book] originally crafted by Alan Moore, and in that Universe with their ultra-folk coming to the fore, it inadvertently prevents the advent of both Marvel and DC characters and alters US disasters in foreign policy, such as Vietnam… But opens up unforeseen cans of worms elsewhere!

In John Ridley’s version of this hyper-portrait, heroes and villains have laid waste to not a state but a city and this was enough to prompt a Presidential ban on “freaks” or “muties” {mutants’ abbreviation}, yet in seeking to stay within the US Constitution – a specialised division of Police known as M-Tac (Nope, not NCIS, this book may have been issued during the same 2003 debut, but it’s another entity altogether) was created to either deport [to Europe, where such characters remain welcome] or “extract” these metanormals as they are known in this particular Universe. This is the main theme for John Ridley’s “Those Who walk In Darkness.”

In this world, blacks appear more likely to gain special abilities – the first character in the book is a pyrokinetic on cocaine, but based on description and speech-syntax, it’s a given he’s not white. Nightshift was the first metanormal, in the reminiscences between chapters, he seems to be a cross between Batman and Superman; soon a black version of Wonder Woman debuts – Nubian Princess… Then another and another and another – you get the drift?

Whether you look at the abilities along a racial divide or not, the author has his regular people compare it as a battle between Cro-Magnon and Neanderthal and the humans are determined not to be the Neanderthals!

The book mainly focusses on Soledad O’Roark, who after taking out an uber-perp on her first mission gets a tag of “Bullet“, something she hates at first. She gives the hindsight between each chapter of what led to the disintegration between humans and metanormals. As the book progresses she reluctantly earns a hesitant boyfriend since they have similar paths of not wishing to disclose life histories and friends who die fast and messy, it is amazing they could not see who is who from a mile off? I leave the rest of the romantic revelation to you the readers out there.

She is punished for using a personally modified firearm and is damn near not just expelled from the force, but accused of murder – despite colleagues hailing her as a ‘hero‘ for downing a ‘freak‘ first go as a rookie.

A lawyer seeking to make a name for herself, takes up Soledad’s cause and battles the division’s Cops on Cops, or the IA: Internal Auditors. Soledad’s attorney doesn’t just have the court martial for breakfast she grabs their own bones and uses them as a toothpick while they watch in shock as she puts paid to the potential threat to Soledad’s career.

There are many other sub-plots carefully woven and John Ridley leaves room for more, he crafted a sequel where Soledad’s quest is expanded on – “What Fire Cannot Burn.” Ridley’s writing style is reminiscent of Frank Miller’s treatment of Daredevil and Batman, yet he has humor interwoven and references galore to comics.

It seems his take on the “war” favors humans yet you can’t help but wonder what is the metanormals’ perspective? The story seems to blend a miltant Civil Rights view with a post-9/11 view on what is safe or what is dangerous…

If Ridley’s view on cops appears ironclad and airtight, this should be no surprise – he was one of the creators of “Third Watch.” His “Straw Dogs” was made into “U-Turn” by Oliver Stone.

A taste of an angle from the “muties‘” view was given when Soledad was given an old-time street-beat in a patrol car and she ends up downing a ‘freak‘ again and it looked like an angel. But Vaughn – the ‘freak‘ is a telepath who was married to Michelle (with wings and other abilities), so his view is twisted with vengeance. What of other supercharacters who wanted to stop Vaughn? It was only a glimpse at other psyches… I cannot wait to search for the sequel, up and away!