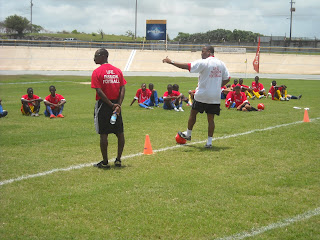 All the players – the 20 identified by the Barbados Football Association along with the other players who were invited to take part in the experience – expressed their delight at having the chance to be trained by football legend, John Barnes.

Six of the players from the Barbados Football Association selection took the opportunity to express their individual thoughts. 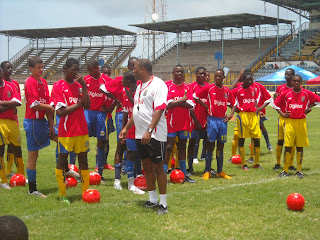 Joseph Tingey is 14 years old and plays for the Kick Start Academy which is the dominant club in junior on the Island.

?It was a very good opportunity not just for me ? but for all the players. We all gained a great degree of knowledge which will help us improve our game over time. I was excited to learn that I was selected to be a part of this Clinic led by John Barnes. Some of the drills we did were new to what we do at our club.?

Tingey, represented Barbados at the under-15 level last year in Trinidad and Tobago and describes John Barnes as a nice person but very serious with the game. ?He is a very serious coach who wanted us to learn as much as we could over the time he was with us.? 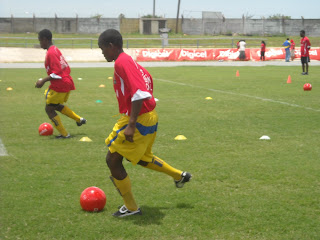 Jabarry Chandler, a striker with the Barbados Soccer Academy said it was a good feeling when he heard that he was going to be one of the 20 players at the Digicel Kick Start Clinic.

The 15 year-old said the exposure will help him to be a better player and, as a forward, he has learnt that he has to do much more shooting. ?Mr. Barnes is a good coach who made us laugh but was also very serious about the game. Digicel has done a good job in helping the youths of Barbados ? we definitely need this help.?

Diquan Adamson attends the Melbourne Soccer Academy and, at age 15, is one of its leading strikers.

?The experience for me was really fine ? I learned a lot of new things and I had fun. When we made mistakes while doing the drills, Mr. Barnes allowed us to do it again so that we could correct it and I enjoyed that.?

Adamson says that he skills learnt during the two days will help his own development and he is confident that he has a good chance now of making the national team and even getting the chance of going to Sunderland for the one week training stint.

?John Barnes is a great coach and fun to be with, he?s a cool guy. Digicel is a great sponsor and is doing something really good for youth players. This experience is something I will cherish for the rest of my life.? 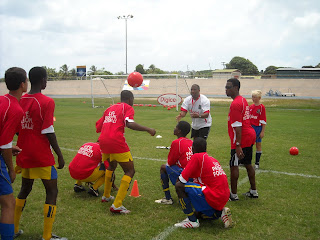 14 year old Amal Mayers is also a member of the Kick Start Academy and plays midfield.

?This clinic was pretty good for me ? but hard in some instances due to the different drills I had to learn and remember. On a scale of 1 to 10, I would give myself a 9 in terms of a successful clinic.?

As well as recommending to his Digicel Kick Start Clinic peers that they must try and make the best of what they learned during the time, Mayers also complimented John Barnes on how good he was with the players over the two day clinic ? as well as complimenting Digicel for giving him the opportunity of meeting and learning from a legend of Barnes? status.

Shomari Stevenson is 14 years-old and is a utility player with the Melbourne Soccer Academy.

When he was first told about his involvement in the Digicel Kick Start Clinic, he said he did not understand what it entailed but, as the time got closer and his understanding got better, the excitement started to build. He noted that some of the drills were new to him and made him think a lot more than usual.

?The coaching was encouraging with Mr. Barnes ensuring that we understood what he was trying to get over to us. I want to thank Digicel and the Barbados Football Association for making this possible for us.? 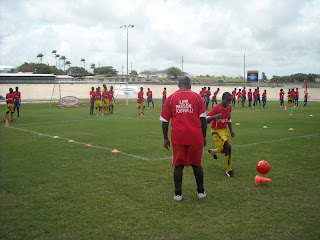 Sebastian Hunte, a 12 year-old midfielder, was very positive in his summary of the Digicel Kick Start Clinic. He is also a member of the Kick Start Academy and travelled with the Barbadian under-15 national team to Trinidad and Tobago last year to participate in the Caribbean Football Union Regional tournament.

?This experience was grand; having John Barnes teaching youth players and the opportunity to play with other players my age – the best in the country – was very satisfying. This has helped us to develop our technical skills and will enhance our overall development.?

Hunte recalled that he was excited to be part of the selection and was nervous at first but when he got to the National Stadium where the clinics were held, he was much more confident.

?Coach Barnes was good; I learnt some things I did not know before and I thank him very much. Digicel is a very responsible company which is helping youth players to develop by affording us the opportunity to train with Mr. Barnes. What we learned here may even help us to make the national team!?

Jamie Dean, senior sponsorship manager for Digicel Group, commented; ?The large turnout at the Digicel Kick Start Clinics in Barbados really shows the passion that these youngsters have for the game of football. We were impressed with the attitude and talent of the players we saw. Now, we?re looking forward to what Suriname has to offer.? 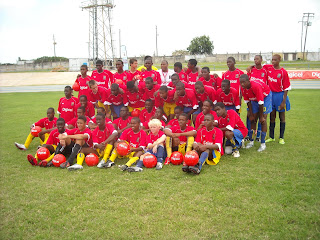