It is said a prophet seldom finds honour in his own homeland, this seems very apt for this Barbadian rock duo… Kite have wowed overseas producers of television programmes and films for use of their music in themes –
the movie Stone Angel, CBS’ popular Ghost Whisperer, Jericho and Canadian series Degrassi among others.

They have toured abroad to Miami and Europe, their last album received great marketing boosts from here and far, to only acclaim from the Barbadian blogs – not really from the Bajan mainstream media. 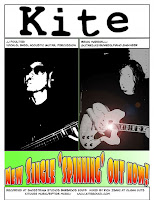 Using internet techniques to promote their work once again, they announced the single via social networking site, Facebook. They revealed their latest single “Spinning,” which is due to appear at Got Rythm Inc. Their previous hit was “Fading Fast,” a duet with Billy Kincaid.

Andy Hamburger’s drumwork overlaid in the middle of the track avoid repetition to quoting themselves. A song here and a song there, is it really filling? The fans know what they like… So how far is another album, plus here’s hoping more corporate citizens will show an interest in promoting Barbadian arts?