A WEEKEND OF POLO and PARTYING!!!

THE DIAMONDS INTERNATIONAL/BVLGARI BATTLE OF THE SEXES 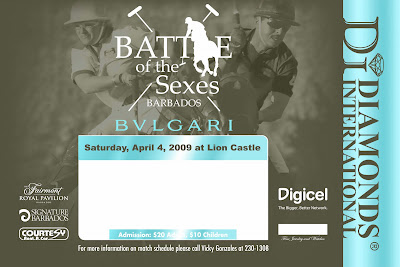 Come see the Diamonds International/Bvlgari ladies ?saddle up and ride their ponies?

against the DIGICEL MEN (Who, BTW, despite adverse weather have trounced the gals 2 games/NIL: at least the ladies weren’t Chris Browned)!

PARTY with the players after POLO!!