Worthing – Erosion of Beaches and Attitudes: Where to avoid and why

Last year, there were a number of stories in print and on tv concerning beach erosion around Worthing, Christ Church in the south of Barbados.

While this is a valid concern, it may profit businesses in the are to mind the erosion of attitudes in their companies especially as it relates to customer service! Stephen Alleyne, not a spectre from CWC 2007 but a former cop now attorney, also decried this increasing trend – anathema to the service industry the same way the pink mealybug can lay waste to Agriculture.

In his article, the service only ramped up when he asked for a customer satisfaction card and the waitress got nervous (I like what Digicel Coconut Walk does, theirs is totally anonymous, no card for writing to distinguish – just buttons to press to relay info to the Head Office)… 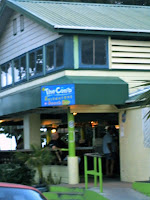 I brought all of this up to note how I recently was at the Carib Beach Bar when one of the bartenders made a joke at my expense, so I made a rejoinder on their personal appearance (How she could place a glass on her butt and it wouldn’t fall even if walking about) – huh, who tell me to let go, eh?

I was compared to an elephant, and when they saw my face then they said how they appreciate me as I can take a joke… I have not been back and don’t expect to be in a good while either! I really am not bothered about my weight (It seems to bug folk moreso than myself), at the same time – why insult when you started it?

Nelson Arms 2 that is almost next door to Carib is not that much better – I went to sing some Karaoke there a couple of weeks ago as I had not been in a while, I was waiting to have my turn at singing and dozed off… The bartender there bellows my name to the point everyone looks around and laughs.

What was to stop her from using initiative and do one of two things;- Get her skinny arse from behind the MF bar and tap me on my shoulder discreetly or ask a fellow patron to do it for her if she cannot leave her station?

You know I am entering FIVE months now I have stayed away from Kentucky & Chefette now – if I add these two dives to my list I may soon have nowhere to go! Philip at Nelson Arms? Raffie at Carib? Get your staff’s act together, before they cost you your livelihood!