The Government of St. Kitts and Nevis has reaffirmed it?s commitment to Special Olympics and the development of its athletes, with the signing of a partnership agreement. 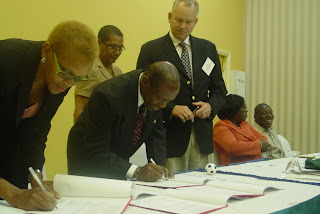 ?I give the commitment of my administration, to empower our athletes as leaders and, to change our attitudes as a people to ensure that we recognize and give the necessary support to those ? who have intellectual disabilities,? the Prime Minister stressed. ?We also commit further, that we will also continue to support the necessary measures that will allow the inflow of support from Special Olympics internationally and regionally.?

?I believe that this is a moment in history that each of you are proud of. ? My Government, and my people are equally proud,? the St. Kitts and Nevis leader added.

National Director of the local Special Olympics Association Clarice Cotton told SKNIS that the agreement formalizes Government?s commitment to aid the growth of the movement. As such, assistance in areas including securing a full time office, recruiting athletes, and providing coaches will be standardized.

The Prime Minister saluted Ms. Cotton ? who was also recently awarded as an RBTT Unsung Hero ? for her commendable leadership, describing her as the ?most appropriate person? to lead Special Olympics locally.

?She understands the special needs of these children, and has been able together with others ? to ensure that not only do [they] have the right to an education, but have the right to represent us around the world as special athletes ?,? Prime Minister Douglas stated.

He noted that these ?Ambassadors? have brought much recognition to St. Kitts and Nevis in many countries including China, where they competed in the 2007 Special Olympics World Summer Games in Shanghai.

The partnership agreement ceremony was witnessed by a section of delegates in St. Kitts for the two-day Annual Special Olympics Caribbean Business Meeting currently taking place at the Royal St. Kitts Hotel.