For my part, there are only two occasions when a man is allowed to “beat” a woman – there’s the occasion when it can be horizontal (Or vertical for more adventurous, but for God’s sake, hold her up!), but no hands nor feet allowed as bare licks applied, LOL!

The other occasion is in Sport, if genders are allowed to compete evenly on an open course – that’s what happened Sunday 5th April with perhaps the Piece De Resistance of Barbadian Polo – The Battle Of The Sexes 2009 tour with Diamonds International. 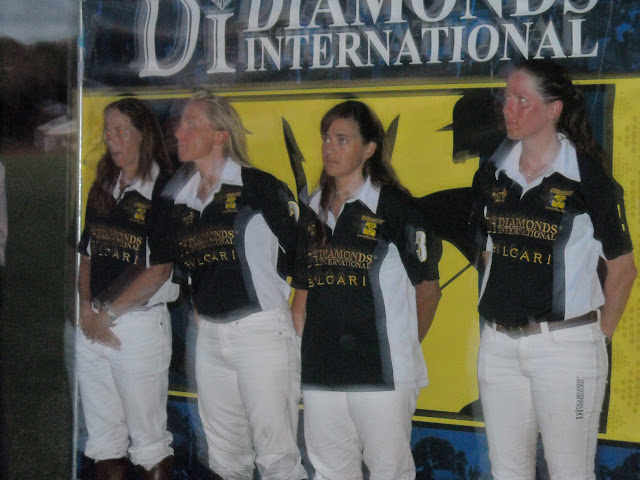 Overall, this year, the men basically “Chris Brown“-ed the gals by 3 games to one, With women beating the guys by a single goal on Saturday 4th with 6 to 5. H’mm – yet they claim payback is a b — ahem!

The dominance came from early in the game as you can watch in this clip;- 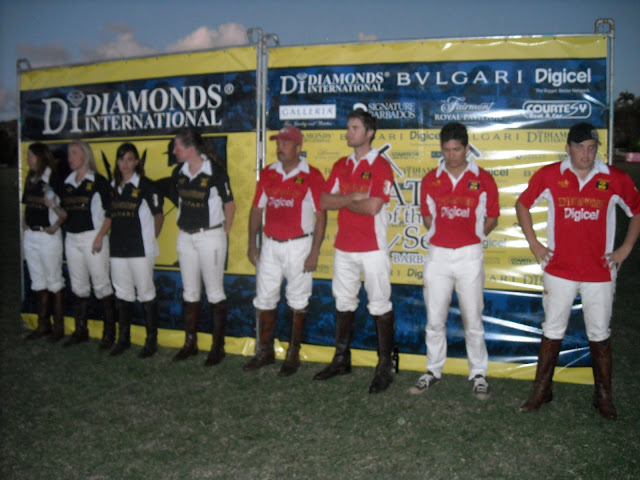 The Main Event was a horrid drubbing, despite Monique Archer’s brave yet rather insane fight against gastro (Not sure which, but heard she became an overnight shareholder in Maalox, Imodium or Loperamide to stem the tide so as to play), the ladies malleted four goals compared to the dudes’ whomping ten. Lucy Taylor’s last chukka in Barbados for this year was Sunday 5th, now she heads for Jamaica with Dad & sibling Oli. 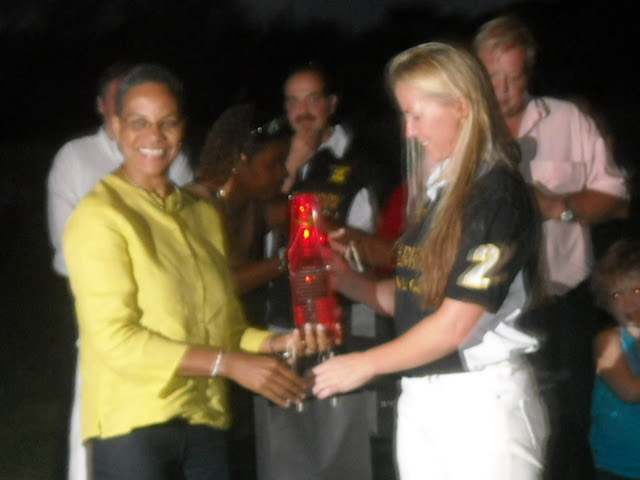 I was the only male to dare to wear blue and support the guys (Wife was at work this time, ha-ha!), and I got so many evil stares as I whooped when the men scored – a lot! Felt like a clandestine dog at a cat show, watching a hairless chihuahua win over the Siamese… 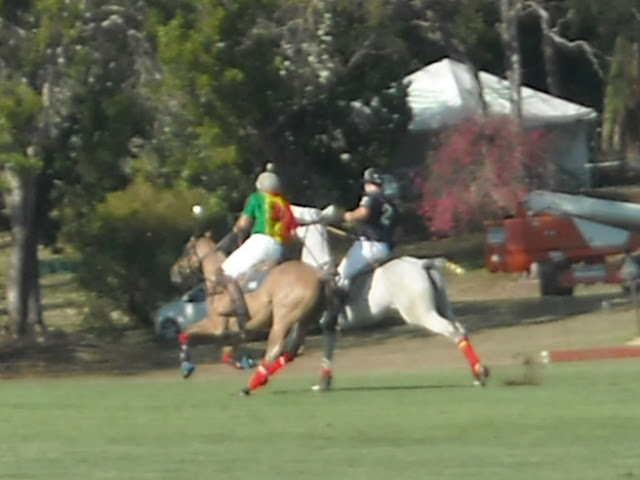 My actions shots could have been better, but thanks to some witless parents, everyone was forced to go back ten feet… A polo ball (Which is harder than a cricket ball in my books) came whistling through between two children and two of the riders really tested their ponies’ braking prowess from avoiding flattening some kids! 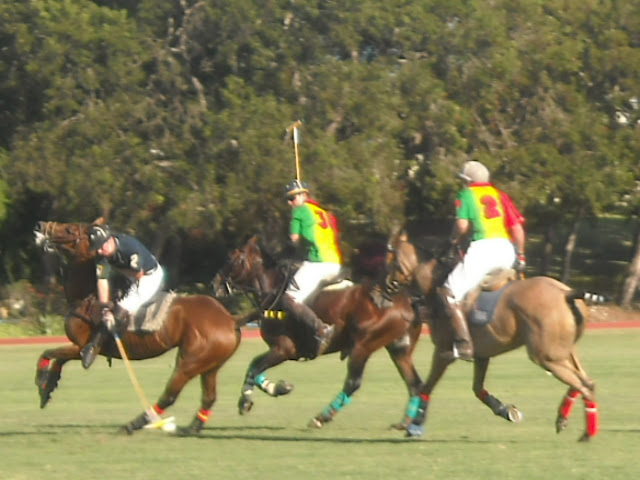 ATTN: There is a sign at Holders which is by the entrance which clearly states polo is a dangerous sport for both players and spectators, so respect the boards at the edge of the field… I didn’t even have to be near the playing field to have my leg hurt, remember? I stand for a reason when I am taking polo pictures, if the horses get too near then I can run (Yes – even me ;P) and parents need to watch their kids better or advise them to be standing and facing the field so when action is too heavy, then the tykes can head off for safer parts quickly! 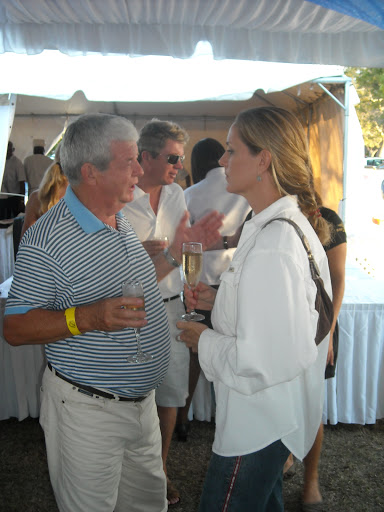 The Royal Pavilion tent was TDF (To Die For) as Gaynelle Marshall says, there were mini steak-kebabs and shrimp on skewers to be washed down with lashings of beer and champagne. James Gardiner of Goldcorp was there… The Canadian High Commissioner attended the gala event along with the Hilton’s Manager, Marilyn Soper – they had a fun time chatting with RPV’s Sales Mgr, Catherine Mapp. 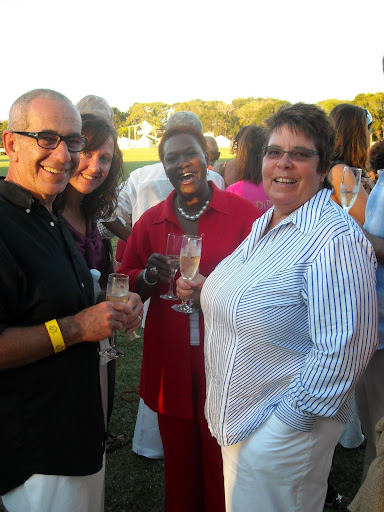 I actually preferred the warm-up match between Roddy Davis’ Big Dawgz and Holder’s Rugby team – this was a close match and full of sport plus much give and take, as eventually Roddy’s team achieved victory by a margin of one from 7 over 6! 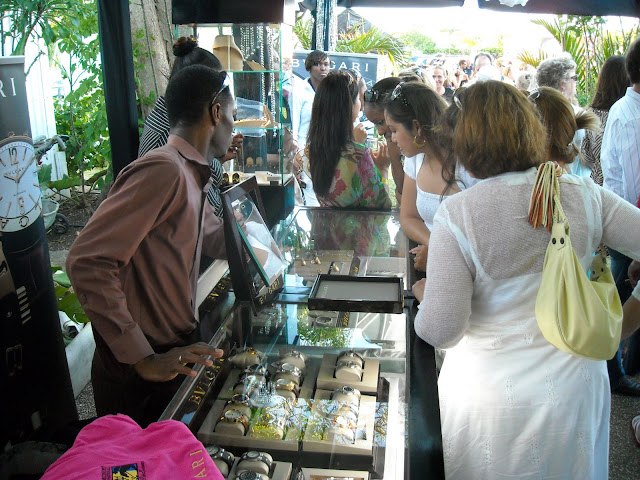 I also loved the Big Dawgz team shirts, their stylee straight out of Jamaica – ‘ites/gold/green… Commentator Jonathan Simpson was joking and said I wanted one, but he’s damn right – those shirts look too cool and I’d pay for one of those (Mind you, could only wear it while wife at work)! 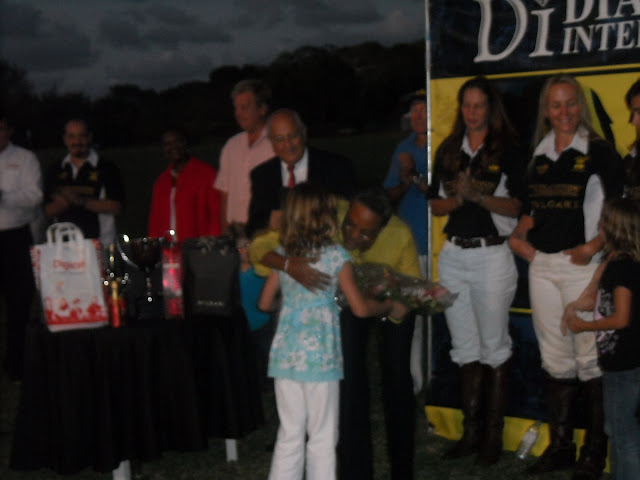 There were the usual features at the match – Bvlgari timepieces on display with potential buyers, the PM’s wife in lieu of Mr Thompson receiving a bouquet, the awards of the Trophy to Capt Danny Atwell, as well as the swell hobnobbing thereafter. 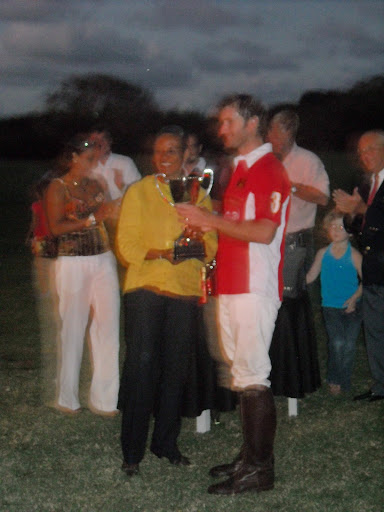 In fact, here’s another video for you – Team Capt Danny Atwell attempting a 60 yard penalty for the Men in the Main Event towards the end;-

BTW – It is actually cheaper to become a non-playing member of the Polo Club, rather than have a huge bar bill and attend almost every game… For $300 per year that’s almost a dollar a day! If you have a bar-bill that’s $100 on a nite, if you have a monthly tab as a member – you’d be surprised to see an almost 33% discount!! Considering my addiction to this sport, it is a definite investment I have to budget for next year!