Once is not enough for Laff-It-Off 2009: Review by Ian W. Walcott

Like how Linda Deane stepped in for me with Dramaworks’ version of Derek Walcott‘s Pantomime, now another Walcott steps forth – Barbadian actor, Ian Walcott, who’s also gone Facebook with his scrutiny of local talent;-

Unfortunately, the curtains finally came down on Laff-It-Off?s 2009 production ?Another Cock and Bull Story,? that had one of its most successful runs in its 24 year history.? 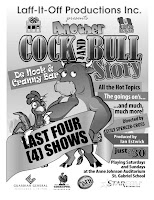 For those who didn?t see this year?s production,?let?s hope that there?s another weekend for the last minute stragglers for you certainly would have missed three hours of pure entertainment, intelligent comedy, good acting and belly laughs to make you fall out your seats. 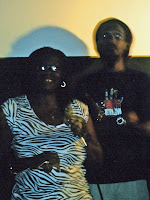 Cecily Spencer-Cross, in her role as director, brought a freshness to the script by modernizing our favorite Bajan rumshop, “the Nook and Cranny Bar,? giving it a website, wireless Internet connection and taking us through the roller coaster ride of converting the bar into a strip joint. Now if that situation alone does not warrant a chuckle, watching Sue with two oversized bunny ears slide up and down a pole is the director?s guarantee that you will laugh.
Sue, played by Carla Springer, was part of what I?d call the veterans, alongside Tony Thompson who plays Lemuel and Sybul Rice, and Peta Allenye who continues to play Wilhemina Herrassofat. It?s also refreshing that Miss Herrassofat has evolved from the passive-aggressive wife who tolerated the indiscretions of Lemuel, into a more liberated business woman who is willing to take new chances with love, lust and her profession.?This new found freedom will allow her the space, as she rightly claims, to experiment with Internet dating and more liberal sexual adventures after being repressed by years of sexual frustration at the hands of her alcoholic-loser-husband. Sounds familiar?
If it rings a bell, it?s because since 1983 Laff-It-Off has always looked at problems and issues in the community and our daily struggles and held them up to our faces like a mural in which we can see ourselves, sometimes ridiculed, sometimes parodied but always truthful.?It is this truth that makes the characters ?sweet? and believable in their purest and most authentic form of Barbadiana.
Sex sells but as a society we continue to be loath at the mention of the mere word so that we transfer our intellectual energy and ability to critique our society into polarized positions about politics, public personas and salacious newsbytes on issues like bestiality. This is precisely what makes Laff-It-Off so successful after all this time.?The producers, director and actors all work as a team and decide each year to unabashedly turn these societal hypocrisies on their head and place them smack in our faces.
It is hopeful, therefore, that the young talent in Barbados will take up the mantel and go forward with this rich tradition of Bajan comedy for which producer Ian Estwick must be given full credit. It was refreshing to see the young brilliant actor Chrispen Hackett as Woodall together with Jherad Alleyne as Panty Pollard, Ishiaka McNiel as Dolly and Toni-Ann Johnson as Allison.?Though Alleyne can be charged a bit with hamming on stage, this young brigade brought a renewed sense of hope for the future of our theater.
I will conclude that just as Daphne Joseph-Hackett in 1970 rightly predicted that Tony Thompson will be one of this region?s finest actors, as he has proven time and time again, I dare say that in 2009 we can make a similar prediction on Chrispen Hackett. He has already mastered the one ingredient that guarantees success on stage. He has perfect and precise timing and the lithe movements of his body together with mastering subtlety will take him into the top tier very quickly. A new star is born!