The Automatic Blood Pressure Monitors which were publicly introduced in St. Kitts last week, have been a hit with the general public.The machines, which use three simple steps to test an individual?s blood pressure, are strategically located at Government Headquarters and the General Post Office (G.P.O.) 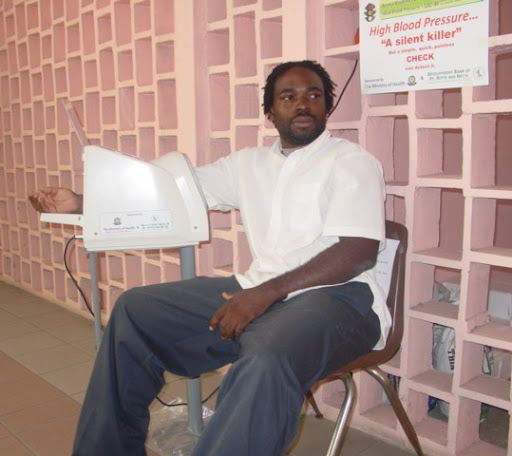 ?I think it is a very good idea having this service available because everyone needs to [be concerned] about their health,? Sheldon said, on this week?s edition of SKNIS Perspectives. He added that it is more convenient to walk to Church Street ? where Government Headquarters is located ? or to the G.P.O. on the Bay Road, for testing rather than making an appointment with a doctor.

Sheldon?s voice was among a chorus of praise sung by persons who knew their hypertension status after using the monitoring machines.

?Some of us in our daily routine don?t even remember to [consider] our health and having this machine is really a good guide towards being more concerned about health issues,? Charles stated. ?We have to get more active,? he explained, while suggesting that persons should walk rather than drive where possible.

His opinion was supported by another individual who said that knowing one?s blood pressure status was a step towards saying healthy.

Coordinator of the Ministry of Health?s NCD Prevention and Control Programme, Petronella Edwards, also appeared on Perspectives and indicated that a shift in the consciousness of residents is necessary to reduce the worrying statistics of NCD’s.

?People are not taking care of themselves enough. We take it for granted that gaining weight is quite acceptable,? she disclosed. ?? We have to have a mindset that our health is important and we cannot produce, we cannot live, we cannot play the way that we should if we don?t pay attention to our health.?

Ms. Edwards cited a recent random survey of approximately 1,500 households which revealed that 19.5 percent of participants were previously diagnosed with high blood pressure, which is medically referred to as hypertension. This translates into 1 in every 5 person surveyed.

Further analysis of the data showed 26.5 percent of participants, or 1in 4 persons surveyed, had raised blood pressure at the time.

The issue generated much discussion on Perspectives.

?That really shocked me. ? I couldn?t believe it,? Charles said. ?That is alarming considering our small population,? Winston expressed. Sheldon described the statistic as ?very sad.?

Ms. Edwards noted that the machines, once used properly, should strengthen the will of persons to the need to change. She added that the operation was easy and the results are produced in less than five minutes. The process was demonstrated on the radio programme, as the host took the test for the first time.

?It?s simple. Even a caveman can do it,? said one person, borrowing the catch line from a popular commercial.

Ms. Edwards encouraged everyone to make use of the blood pressure monitors and appealed for private sector agencies to follow suit and purchase one that can be used by their employees and clients.