If this is Lent, what was borrowed? What is good about no meat on a Friday? MYTHS OF CHRISTIANITY – EXPOSED!

First of all, I know I will very likely be stoned for my so-called “heresy“, but the truth – as HL Mencken once stated – is still sitting in the corner calmly licking its chops.I intend to eat a nice beef roti today, (No, not Chefette – 4th month I stayed away from them & KFC now… I durst not state where the roti comes from lest you all boycott it for its unwitting support in my rebellion) if I could, I’d eat a steak for dinner – nice, rare and juicy with sea salt & cracked peppercorns.

This may be thought to be the height of apostasy – but show me where in the Bible it says meat must be abandoned… For that matter where does it claim in this same document that if you spread the word of God you must be celibate, single and childless?

The New Testament was written 400 to 600 years after the fact – how many times do you feel there’d be a slip between the pen and the nib? Man is fallible, then again, man is made in God’s image so is God open to error? Ask Lucifer… But if vengeance is God’s and we are made in His Image, then it is no surprise why so many faulty humans seek retribution in however small a manner for perceived wrongs visited on them.

Again I will state – Lent cannot be found in the Bible, there were 40 days and nights that Jesus spent in the wilderness resisting Satan’s temptations – but He did not advocate His disciples to imitate His task which He inflicted on Himself alone. At this time of year in Barbados, performers from other islands would hop through and have a spectacular ‘do at the National Stadium – decades ago it was mainly calypsonians, now it’s a preponderance of reggae thugs (Perhaps explaining the mounds of filth left behind after such hilltop events – maybe it is hoped these would destroy the ruins in Farley Hill)…

This too is objected on the grounds of Easter, yet there are two points to consider – Easter is actually a corruption of Ashtarte: Goddess of Fertility and in Psalms it clearly states make a joyful noise unto the Lord. As for dancing, Irish have Riverdance and we frown on wukking-up but does the Bible state anything on feet movement and otherwise? I do not know what the Talmud nor the Q’uran state about dancing, but was this not applicable for the time it was handed down as an edict? Have we not evolved beyond a teenager getting a hard-on from slow-dancing with a cute chick? Even in the Baha’i faith, it says worship is what you do at work while in service. Meaning? If you are a cop arresting a crook then you are respecting God; a Doctor doing surgery or a blogger writing an entry these are all considered means of acknowledging a Higher Power. Why do we object to reggae or calypso played here during Lent when we are not a Catholic country?

If Trinidad and Grenada can use here as an alternative for playing during a Man-made season, should we turn them away for new-found religiosity which usually disappears by the end of this month? Is it not better to try and profit from their foreign exchange be it direct or indirectly spent? Even as Anglicans, Bajans are not very hospitable – the Reverend Errington Massiah once asked me if I thought it was wrong for him to look at a man and say “Oh yes, I buried your baby a month ago“? 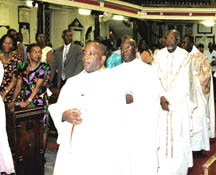 I was shocked and told him he could have found a better way to phrase it, Massiah gets vex and walks away from me? What kind of priest is he if he cannot take advice not unkindly provided?

I have a skeptical view of most religions as you can tell, but I do love God and accept Life could not be without Him/Her/Etc.

This is why Lent makes me wonder what was borrowed? Where is this stipulation of avoiding beef? It is a HISTORICAL/Hysterical plea based on Finance and nothing to do with Religion!

Around the fourth century after the Founding of Christianity, the Holy Roman Emperor Constantine was lobbied by fishing interests of the day for an increase in sales, and between them they cooked up Carne Vales – a festival to do away with meat, eat nothing but fish for 40 days and nights as Jesus was a fisher of men who was tempted for the same 40 days and nights! I have links throughout this entire article and you can do ur own research to dispute or verify my posits…

As I wrap up this meaty subject, let me reiterate – Lent is Man-made and not God-decreed, there is no true religious dogma on meat except pork (And that was for health reasons in those days, now, modern Man knows how to burn away any bacteria from raw meat whether beef or swine) and that was more for Jewish folk; music and dancing are meant to be celebrated with or without religion, it is up to the mover to decide the level of sexuality in the song or the move; finally? Lent is a so-called Christian fantasy set to impose limitations of whatever nature on those who acknowledge that way of worshipping God. Be it to stop smoking, refrain from sex (Now that is a sin to me!), withholding meat or booze or gambling or something for almost 2 months – if you wish to to do so, fine!

Me? I am going to play some kaiso and wuk-up to it while I eat the rest of my beef roti, L8R!