At the request of the Government of Trinidad and Tobago, the Canadian Forces contributed to multi-national security efforts for the 5th Annual Summit of the Americas, providing maritime surveillance and security in support to the Trinidad and Tobago Defence Force. This deployment aligns with the Government of Canada’s America’s Strategy and the Canada First Defence Strategy. 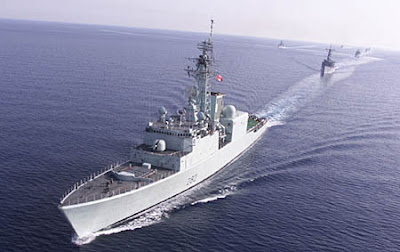 While in Barbados, the crew will be participating in a Community Service Project, tomorrow Saturday, April 25, 2009. 65 members of the crew, including Commander Steve Jorgenson, will be carrying out repair work at The Learning Center, Orange Hill, St. James, Barbados. The work will include painting of the interior and exterior of the main building, tiling several rooms and carrying out general repair work.

This project is being funded in part by the Government of Canada, through the Canada Fund for Local Initiatives, the Department of National Defence, and the Canadian High Commission. Several local suppliers of goods and services, including Branker’s, and ACP Tile Ltd, will also be assisting in this worthy project.