Globe Cinema shows Marvel Comics movie ahead of World Debut – What contract claws let them show Wolverine before 1 May??

Can you recall when a video chain outlet in Barbados had “Rambo: First Blood – Part 3” about six weeks or so before the Globe cinema & drive-in here got it, and there was such a hue and cry that it made the Brass Tacks radio talk show on VOB?

The uproar nearly destroyed the video outlet – comparisons were made with the business that were akin more to the original Blackbeard than say, Jack Sparrow…
That was 21 years ago, wow – didn’t seem so far off, but what can you say now the Globe has pulled a coup similar to those it objected against decades ago? How is it possible for them to show the Marvel Comics film adaptation of Wolverine ahead of the planetary debut scheduled for May 1st? I’m only asking a question?and casting no stones, ok? Don’t take my word for it, see yesterday’s papers and also today’s and judge for yourself by calling the?Olympus?at Sheraton – who won’t be showing this movie until?Friday… 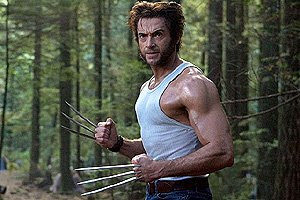 (Me, I love the multiple ironies – here’s Logan/Wolverine, a short Canadian played by a tall Aussie)