West Indies Captain Chris Gayle says his team is focusing only on winning the Digicel One-Day Series and not any off-field matters as the players ready for the decisive 5th and final Digicel One-Day International at Beausejour Stadium tomorrow. 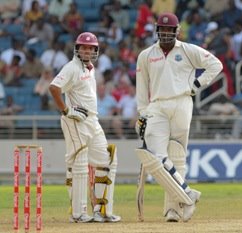 ?We?re totally focused, to be honest with you, even though a lot of things have been happening off the field. We?re here to play cricket,? Gayle said. ?We?ve been in these sorts of positions before and players weren?t affected by it.?The West Indies Players? Association (WIPA) and the West Indies Cricket Board (WICB) started meetings yesterday and ironed out a number of long-standing concerns on both sides of the fence.Gayle said that his feedback was that ?things have been in good form?. The powerful left-hander stressed that it will be business as usual come Friday morning: ?We are actually pumped up. This final game, we need a big effort tomorrow from each and every one. Hopefully we can finish off on a high.?We have won the (Digicel) Test Series and the (Digicel) Twenty20 so this is just one big effort tomorrow to actually win all three series. Tomorrow is a very important game for us and we believe we can get the job done.? Gayle said the sell-out crowd could help push his team over the line: ?It?s good to know that we still have the support. The majority of the one-day games have been sold out which is very good and very pleasing to see.?That shows that we still have life of cricket here in the Caribbean so that?s good for the future as well.?Gayle also said he hoped for a big performance from St. Lucia’s own Darren Sammy, the energetic all-rounder: ?He has been playing a wonderful part for us. Hopefully he can give them an even better performance in front of his home crowd. I?m sure he?s looking forward to it just like us.?