West Indies captain Chris Gayle said after his team?s victory in the 1stDigicel Test in Jamaica more than a month ago that any talk of ?turning the corner? would have to be left until the conclusion of the Digicel Test Series 2009.

There were more murmurs of corner-turning as the imposing skipper held aloft the Wisden Trophy at the Queen?s Park Oval following his team?s fighting draw on Tuesday. That result secured a 1-0 success, the first series victory for the Caribbean side since June, 2004.

?I am happy and overjoyed. The wins for us have not been coming often. I just want to commend each and everyone for the support they have given me, the character that they have shown individually and collectively,? Gayle said. 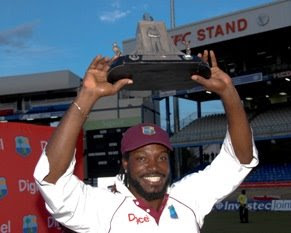 ?This result is not only for the team, but all the people of the Caribbean, especially those living overseas, I am sure they are jumping for joy now.?

But Gayle warned against any talk of a return to the glory days of the 1980s and 1990s: “We still have a lot of cricket to play and we are still learning the game every day. But this victory can help us lift our standard a little bit more.

“It will definitely help us to raise the bar, and we are now looking forward to our next Test series, which is in England, where it is going to be tougher, and the conditions will be a bigger test for us over there.”

Gayle revealed that the players were maturing as individuals and everyone felt comfortable in their roles within the team: ?Everybody has an understanding of what is required of them, rather than have someone constantly reminding them about how to go about situations. We are looking to build up a unit. It has been really, really good, and the guys have put in the hard work, so it has paid off for them out there.?

Gayle?s hamstring injury will rule him out of the first Twenty20 International in Trinidad on Sunday but he believes the Test series win will boost the confidence of his team: ?It is a psychological boost; these guys are looking forward to it and they all remain focused.?