What’s on your bookshelf #2? Some Caribbean magazines with Barbadian angles…

PATIENCE – Rx FOR ANY Dr’S WAITING ROOM
Nothing beats a magazine for portability, instruction and fascination when placed at crucial situations where time may be of the essence, just not yet… Say – Applicant #4 for Sweet Cushy Job (U don’t know if you qualify but you have an aggressive yet comprehensive and contemporary pitch laid out in ur skullbox); or – you are at any Emergency Room with a mashed up joint but then there’s a wheezing kid in need of a nebuliser two seats away and what about that blood on the floor waiting to be mopped as the receptionist takes payment from a patient? Not very likely to expect a nurse or a doc in any hurry then – even the janitor is stretched out!
How about if you are third in line to be quizzed by your bank’s branch manager on that loan you need to do some key renovations to up the value of your hacienda? Do you see how rapidly your thumbs can rotate over one another? Gnaw your cuticles? Play “Snake” on your mobile?
Or have a nifty/sexy periodical which can not only while away the time, it speaks to your mental acuity, your hobbies and may even create a conversation with some useful person – potential chossel, great business contact, useful service to tap on next time you need to try a new plumber or whoever…

So what magazines should be in your grubby paws or under your shoulder or tipping jauntily out of your portfolio? Here are some options depending on what you’re doing or where your hopping to and from…

Liat (1974) Ltd has totally revamped their flight-magazine’s appearance and now have readers wondering if there’s a possible alliance with the new identity of Cable & Wireless. LiME is an acronym for live/inspire/motivate/explore, not landline\internet\mobile\entertainment as other wise touted.

LiME as a magazine title is cool, many periodicals overseas have the same name for different reasons –
most connected to theatre; as in short for limelight…

LiME as an abbreviation for a cellular/cyberspace entity is not so good. C&W’s rep over the ages has been one of a monopoly content to do little for much as they were the only player in town, with Digicel barking at their tail that tactic had to go like day before yesterday!

I think those folks should have had MiLE using the same services, but try and convince Caribbean folk they will now go the extra mile to please them (Although it really looks likeSSDD – when my ADSL was down I had to wait 13:47 minutes in one call and 15:02 for the next, despite their pledge no user would have to wait more than 60 seconds for an easy resolution to their problem, LMAO)!
Anyhow, Liat seems to be on to a good thing as opposed to others using this name… Their foreword is from their chief commercial officer – a former student of mine from my days as a Graduate Assistant in Dale Carnegie, was tickled pink to see how far she’s reached! They have a quiz where I discovered which island has a deadly reptile, a view at being your own boss (Via chatting with Anver Versi), and more than one feature on Barbados! 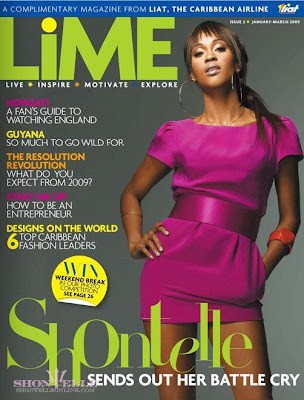 23 year old Bajan wunderkind, Shontelle, is interviewed on her Democrat success with her song as title-track and how her website keeps fans up to date on her activities, plus where you can buy her latest disk and so forth.

A long feature on the Garrison and its ancient military history (Although they think there are still medical ruins, these are now part of TGI Friday’s and fully refurbished more or less), and I leaned from the article Barbados has the largest cluster of olde UK cannonade in this hemisphere!
There’s also a photo contest where you can win a weekend for two, but it’s better to check their site for full details, their theme this quarter is Carnival.

If you prefer reading material more of a sporting nature and you venture further into the Caribbean, why not seek a copy of the Jamaican edition of Karen Kranenburg’s “Polo & More“?
In examining Jamaica’s almost 150 years of “horse-hockey,” you realise their players have been more integrated from the 60’s and 70’s
(Nigeria has competed there) and only WW2 slowed down the sport (via fuel shortage) which can have 12 or 16 goal chukkas as opposed to Barbados’ 10 or 14 comparative matches. 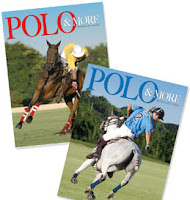 Emma Tomlinson who’s known to have a lash during Battle of the Sexes here, also plays in Jamaica. Carib Beer is one of the main sponsors for chukka-holics over there. Virgin Atlantic has a contest there for Jamaicans to have a chance at attending British polo, and apart from Drax Hall here in St George, there’s another Drax Hall in Jamaica which is a polo venue – thanks to Karen’s weekly column for the Gleaner which is an adjunct for her other edition of Polo&More.
How does Errol Flynn tie in to Jamaica and this sport of Kings and Cowboys? Get the Jamaican edition of Polo&More to find out!