Revival of Derek Walcott’s retelling of Robinson Crusoe to launch with Gala at Frank Collmore Hall 13-3-09 (ATTN: NC-17, Adults Only)

First performed in 1978 but ever timely and topical, Pantomime is Nobel Laureate Derek Walcott‘s hilarious and thought-provoking post-colonial masterpiece.

Set on the island of Tobago in the gazebo of a crumbling hotel – paradise satirically poised on the edge of a cliff – the two castaway protagonists are Harry Trewe, a retired English actor and the owner of Castaways Guest House, and Jackson Phillip, a Trinidadian, Harry?s factotum and a former calypsonian.

Woven into the very thread of Pantomime?s fabric is the contentious issue of race relations in the contemporary Caribbean. As the plot unfolds, however, it becomes clear that both Harry and Jackson ? despite all the things that divide them – are really two sides of a single coin. They share a sense of humour as well as a sense of loss and anger. And then a game of ‘one-upmanship’ dramatically reveals that the same blood runs through their veins, the same dreams run through their minds and the same traumas break their hearts. 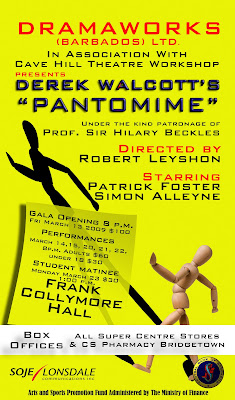 The play opens at Frank Collymore Hall on March 13th with a special Gala performance and Auction of fabulous items; the proceeds of which will go towards future productions of Dramaworks. The performances continue on March 14th & 15th, and on the following weekend of the 20th, 21st & 22nd, with a students’ matinee on the 23rd March.

Tickets are available from all Super Centre stores as well as from CS Pharmacy in Bridgetown at $60 for adults and $30 for students.

Please note that Pantomime is an adult play and NOT suitable for young children.