“Pantomime” Author seeks to be first Caribbean National to be Oxford’s Professor of Poetry: Up against first female candidate

My Aunt Diana is October-born like myself and so very into literary matters, she composes poetry and the like… She did not know that “Pantomime” is on here, in fact – tonight Sunday is the last Adult performance, and Monday’s matinee show for students at 1:00 pm is the absolute last call at Frank Collymore Hall; my ankle healing and subsequent return to the day-job prevented me from witnessing the spectacle! 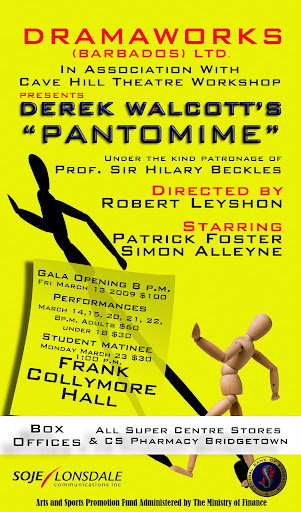 Nevertheless, she sent my mom an item about Pantomime’s author, Derek Walcott, who’s vying for a sweet post considered second to Poet Laureate, the item hails from the online Guardian [DW pic is mine, flyer and play photos from William Cummins];-

…. Literary names are lining up behind each of the candidates, with Walcott supported by Booker prize winner Alan Hollinghurst, Marina Warner, Jenny Joseph, Graham Robb and professor Hermione Lee, who is organising the Caribbean writer’s campaign. {Ruth} Padel, {is} the great-great-granddaughter of Charles Darwin, has supporters from both the literary and scientific spheres, with Victoria Glendinning, philosopher AC Grayling, television producer Sir Jeremy Isaacs and eminent scientist Jocelyn Bell Burnell in her camp.

“He’s very keen and energetic,” said Lee of her candidate. “He’s by no means an ivory tower character … I think it would be a wonderful, extraordinary opportunity for Oxford to have a Nobel prize-winning poet.” 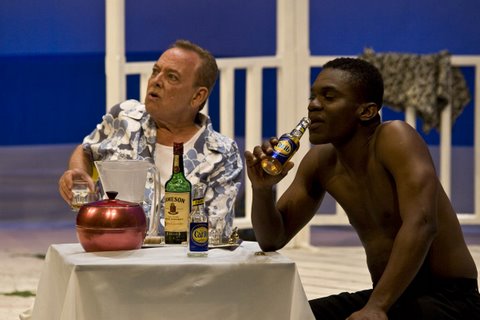 Lee, who said that previous incumbent Seamus Heaney, a friend of Walcott’s, was “very keen” on his candidacy, added that the competition was “particularly exciting” this year. “We have a Caribbean, prize-winning poet up against the first woman? that’s two firsts,” she said. “It’s now a matter of drumming up support.”

Candidates for the post, which was held in the past by WH Auden, among others, have to be nominated by at least 12 Oxford graduates. If, as is the case this year, there is more than one eligible candidate, graduates will be able to vote for their favourite in May, when current incumbent Christopher Ricks, the literary critic, steps down. The professorship’s duties include one public lecture a term, as well as raising the profile of poetry within the university.

“It is really good news that there is to be a contested election, and we hope that as many [graduates] as possible will come to Oxford to take part in the voting on 16 May,” said chair of the English faculty board Dr Sally Mapstone. “The two candidates nominated so far, Ruth Padel and Derek Walcott, both have excellent credentials for the post, and each has an outstanding record as an ambassador for the subject. It would be a great privilege to have either of them as Oxford’s professor of poetry for the next five years. There is, though, still plenty of time for other candidates to be nominated.“

Padel said she hoped to use poetry to reach across disciplines. “My scholarly links at Oxford with classics, anthropology and modern Greek go back 40 years, so I bring several extra perspectives to poetry,” she said. “I’d love to work with students to make poetry connections with the Ashmolean, with music (I sang in the SCO as an undergraduate) and science. My book on conservation, my Darwin poems and others commissioned by scientific institutions like the Natural History Museum, have made me realise what good science and poetry have in common: precision, imagination and curiosity; pushing at boundaries and thinking out of the box.” 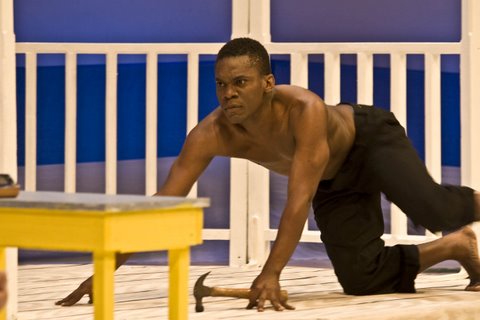 So why not head for FCH tonight after Clifton’s polo final for the Barbados Open, or stretch your lunch hour the next day and head for the Frank Collymore Hall come Monday, and witness the final & matinee rendition of Derek Walcott’s “Pantomime” directed by Rob Leyshon, starring Patrick Foster and Simon Alleyne?