Objections to Pichon: Another perspective on Carl Moore’s view of Castro’s Cuba

I was quite surprised at the description Professor Carl Moore gave to readers of the NATION Newspaper of Cuban society under Castro, for it is at odds with everything I have learned about Cuba in my 36 years on the Earth – granted – I was not born there, and never visited the country; but I have met many Cubans, some supporters of Castro – some opponents… but none have ever described racism in a manner even vaguely approaching that which professor Carl Moore has.

I recall former Cuban Ambassador Lazaro Cabezas (a ‘white‘ Cuban – though seemingly as brown as myself) who’s wife was a black Cuban, as a young man in Cuba Lazaro had participated in the 1959 revolution and was jailed by the Batista regime towards it’s end – being freed from prison by Fidel’s forces just before he was to have been executed the following morning. Lazaro said it would have been frowned upon in Batista’s time for white Cubans to marry black Cubans; but revolutionary education erased the old prevailing racist views as his wife explained.

Students of history know that black Cubans were with Fidel from the beginning in the Sierra Maestra and also fought with Che to the end, some are STILL ‘big boys‘ in the regime today.

I had presented the then (1995) Cuban Ambassador Lazaro Cabezas with a booklet I wrote about the first National Hero of Cuba (officially recognized by the Castro regime not by any previous government) – which was a brown (not black or white) Arawak Amerindian called Hatuey – whom I named my first born son after. 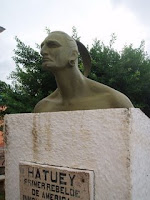 I also told the Ambassador about the Taino-Arawak village in eastern Cuba I had heard of that most ‘Cuban experts’ do not even know exists, Lazaro said he knew of the place and they (the Castro Government) were in the process of re-writing the history books to reflect that reality – because the pre-Castro educational material had incorrectly claimed that there were no Cubans of pre-Colombian descent (and features) still in existence in Cuba.

A Palestinian friend of mine who studied in Cuba in the late 1990’s confirmed that the History books had indeed been subsequently corrected as I was told would be done.

According to National Geographic there are just under 12 million Cubans today, of which 51% are mestizo/mulatto, 37% white, 11% black, and 1% Chinese…so unless professor Moore is of the view that “anyone who is not white is black” – his claim that most Cubans are ‘Black‘ is incorrect. two of my cousins just spent a holiday in Cuba and they did not see anything that would lead them to believe that there was any accuracy in the professor’s claims of rampant racism.

Thankfully, I was able to meet and converse with a Black Cuban taxi driver who is living in exile in the USA on one of my trips to Miami, this gentleman said that he had spent 10 years in a Cuban jail because he did not support the ideology of the Cuban government, and I asked him if he hated Castro and if Castro had been bad for Cubans of African descent (since I wanted to hear what a black Cuban victim of the one-party state would say) – and I was shocked to hear him say “No, I do not hate Castro, I do not want to see him die – just change and be more democratic, but compared to Batista’s time – we (Blacks) in Cuba have many more opportunities and equality in the workplace …as long as you support the party.” Black Cuban medical workers in Guyana say the same, I have not yet heard a black Cuban say that ‘racism was rampant in Cuba and ethnic tensions were on the verge of boiling over‘.

Where are all the black Barbadian ‘friends of Cuba‘? – I am not seeing any letters from them refuting professor Moore’s claims…I wonder why the silence all of a sudden.

Lastly, I can still remember seeing Cubana Airplanes at the Grantley Adams International Airport being re-fueled before they crossed the Atlantic with their full loads of Cuban troops (who were at that time the most combat trained in the Western Hemisphere) to Angola where they literally fought (and many died) against White South African invading forces to liberate Black Angolans – and the fact that CUBAN blood was shed all over the African continent in defense/liberation – of BLACK peoples – while America and Europe were happy to have friendly relations with the racist South African Apartheid regime and prop-up a myriad of ruthless puppet dictators across that great continent – is a fact no black person should ever forget.

Am I the only one who recalls seeing a Black Cuban General (the top brass at the time) receiving the Cuban troops who were returning home to a red carpet treatment attended to by cheering crowds of all races in Havana (on CNN).

Folks should recall too, that one of the first persons Nelson Mandela called to thank for supporting him through his 25 years of misery in an Apartheid jail was FIDEL CASTRO, who Mandela credits to this day with hastening his release by way of the resounding defeat Cuban troops inflicted on the South African military on the battlefields of Angola.