“Every island is different – every island is the same;” A collaborative Art Show on at Zemicon Gallery, B’town – March 15th to 31st 2009

“Every Island is Different: Every Island is the Same” {On until March 31st} is presented as a collaboration between Caroline Sardine, or Bops (as she prefers), and Philip Nanton. 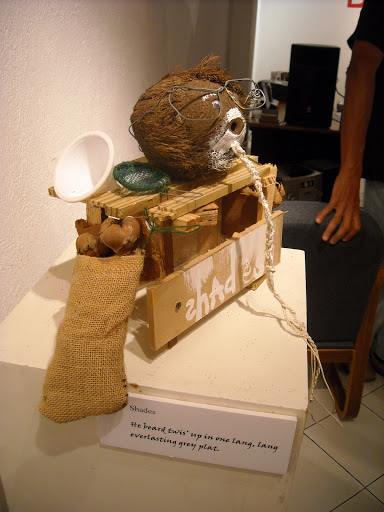 Though born into the tiny white minority of St. Vincent, Bops spent her early childhood blissfully unaware of social hierarchies and racial difference. The world was whole and an arm’s length away: through her window, she could see Young Island and the Grenadines, Kingstown was a few miles up the road, the peak of Soufriere somewhere in the distance. Soon enough, however, this idyll was invaded by the harsher realities of the external world, and growing up became equivalent to coping with a steady proliferation of challenges (looking white, but “feeling black” being just one of the crowd). Ultimately she came to see ‘difference’ as the most constituent aspect of her identity. 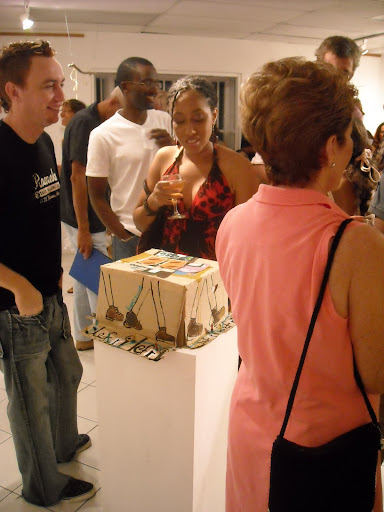 At school, and to some extent even at art-school, she found herself butting her head against the conventions of spelling and ‘life-like‘ drawing, until she at one point simply revolted and took a direct approach to both writing and picture-making: breaking rules became a means of appropriation, any style and any medium a vehicle for self-expression. Her irreverence paid off: after graduating from the Barbados Community College she was accepted into the Edna Manley College of Visual Arts in Jamaica and subsequently the Royal Academy in London. 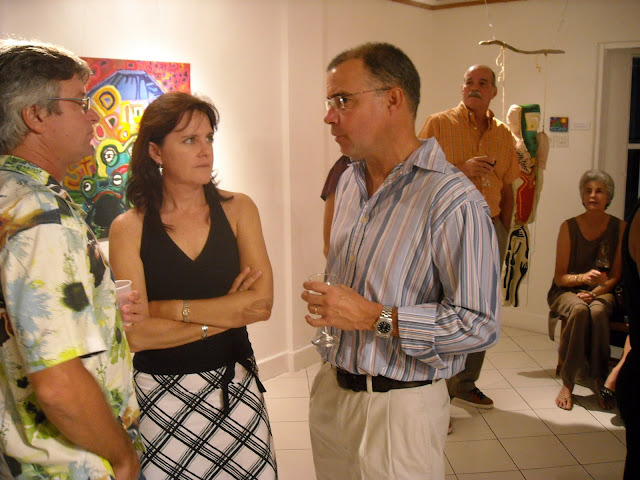 What emerged in the course of this education was a written vernacular, which has become somewhat of a Bops signature-style, and an arresting pictorial language, crafted through trial, error and dogged determination. She has described this language, which draws equally on street-art, graffiti, imagination and the trenches of her own psyche, as a sort of ‘intuitive surrealism‘. 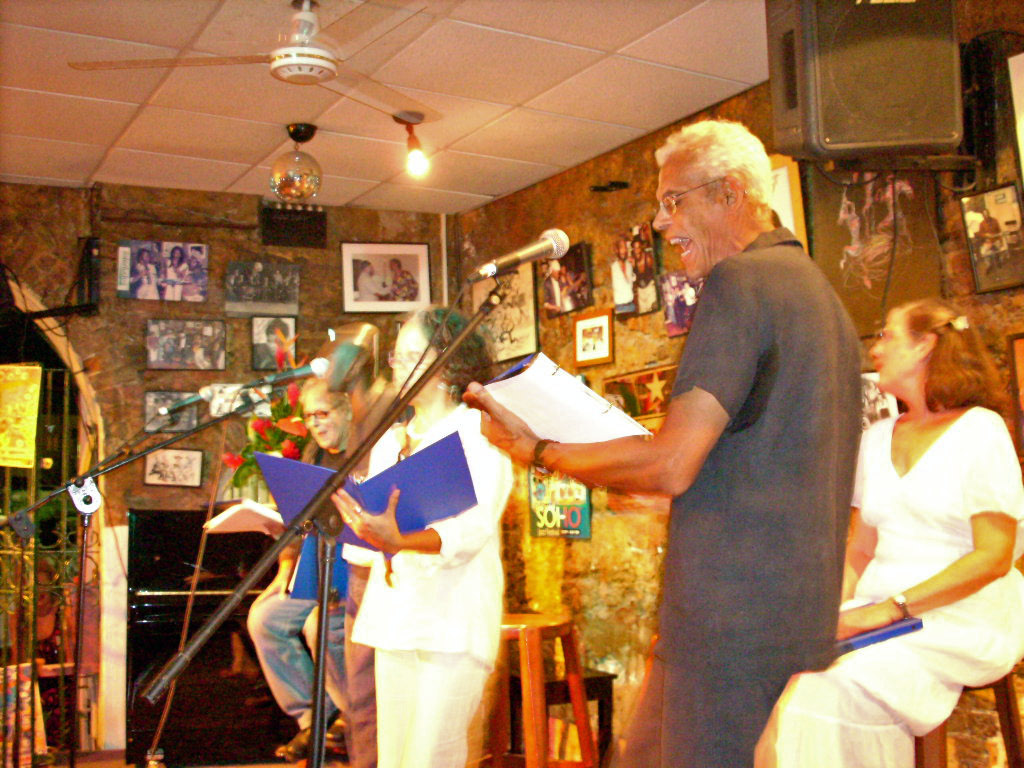 Philip Nanton is known as an academic, writer, poet, dramatist and producer of several radio-documentaries. Vincentian by birth, he studied sociology in the U.K., where he remained until 1999, when he relocated to Barbados. 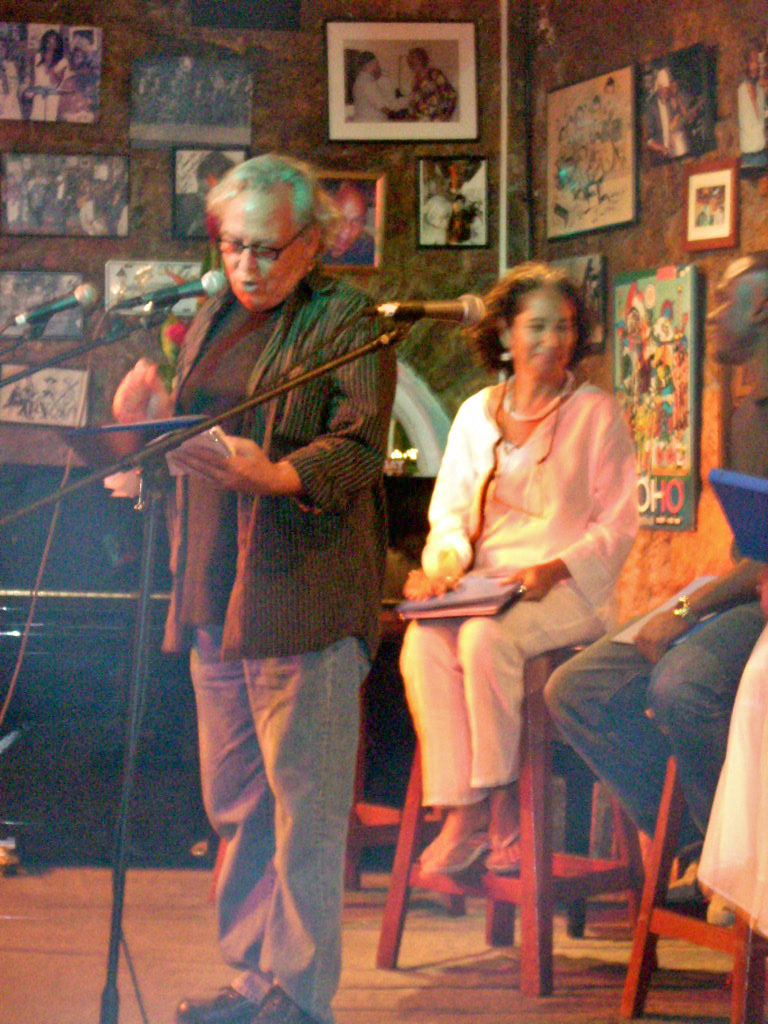 His recent productions include “Remembering the Sea“, a commissioned commemoration of Frank Collymore (a likeminded ‘serious humorist‘). Island Voices, however, was Nanton’s own initiative and is written and produced by him. The recording is directed by Robert Leyshon and the characters are interpreted by Kaye Foster, Laura-Lyn Hutchinson, Simon Alleyne, Patrick Foster and Philip Nanton himself.

In the recordings, the actors use various Caribbean dialects, but above all Nanton has a great ear for the construction of language ? its subtleties, loopholes and quantum leaps, as well as individual and cultural mannerisms ranging from the naïve to the ingenious. It is indeed through his sensitivity to the language and its subversive power, that Nanton averts the stereotypical. If the energy of the script sags a bit when it deals with middle-class characters (especially female), compared with those of the working-classes, it leaves the listener wondering whether this reflects a lesser investment on the part of the author, or if their comparative dullness is part of the characterization. It is certainly significant that the free-wheeling, creative and highly individualistic use of language at the bottom rung of the social ladder makes the middle-class look strait-jacketed, pale and – well, deprived – if only of cultural distinction. 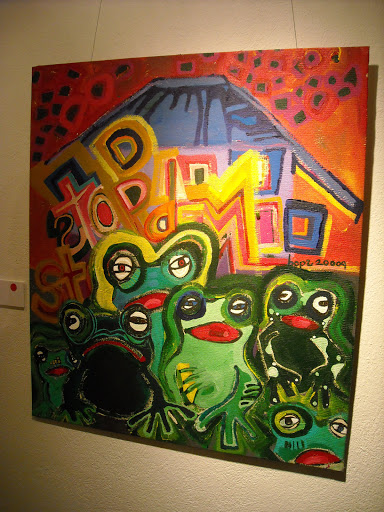 It will seem that Bops wisely has acknowledged the futility of trying to keep pace with Nanton’s rambling rap, or the intricacies of the relationships he outlines. Instead she has picked up on a particular phrase or concept in each piece (or, in a couple of instances, the overall description of one character). Where ?Country?, for example, may refer to a certain form of music, but also to the bus as a metaphor for ‘nation‘, Bops has wisely chosen to focus solely on the driver?s hilariously cross-cultural paraphernalia, and the result is that the painting can function independently of the corresponding sound-piece. This is generally the case, when she is able to substitute the narrative with a singular and striking image, as in, say, “Wake-up Call“, “Morning at the Library” and “Man to Man“, ‘Shades‘, in which she wittily identifies the coconut vendor with his product, is the most easily recognizable, whereas ‘Big Man‘ actually transcends the self-satisfied and paranoid retiree of the script, and creates an alternative and perhaps even more interesting character in the form of a puffy and transparent white puppet.

Bops’ St. Christoper is every bit as colourful, absocky and energetic as Nanton’s, but it is not a place invested with sentimentality or indeed very much of the almost sacred character the concept of home has occupied in her previous oeuvre. Whether this results from her loyalty to the task at hand, or whether it reveals that ?home? is not a geographical location at all, but the lost realm of childhood, is difficult to determine. 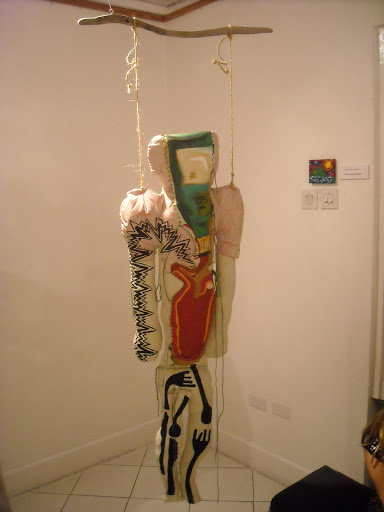 There is, however, a discrete self-declaration of a different sort, which imparts a certain vulnerability on the writer: for a glimpse of Nanton without the protective shield of a character, we must turn to the two pieces, which “almost as if by design” are least likely to hold the listener?s attention: ‘Mood for Mugging‘ and ‘Weather Reports Grenada‘. The poems woven into these scripts are Nanton’s own (in one case meandering around Shake Keane’s “Angel Horn“). Chances are that, when you have forgotten the rest of the album, they stick.