Will Smith appeared in a film on the six degrees of separation in that there are only six other folks leading to the connection of another person all over the world. SF author Theodore Sturgeon years ago looked at how a butterfly flapping on the Wall of China could lead to a number of events – like how a man who never played golf in his life strikes a hole in one first go, or the same event led to a hurricane off of Miami… 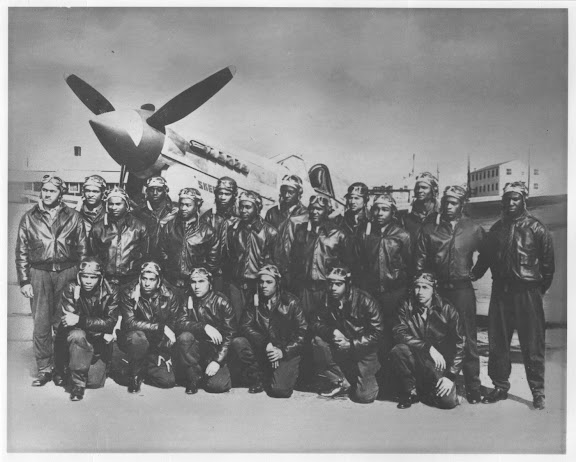 Where is this going then? I was citing these odd connections as to how one story can lead to another and you may have originally felt there was no way to link them together… In my TRAILER for this month, I had hinted what was happening with the next generation of the Tuskegee Airmen… This is how it happened… 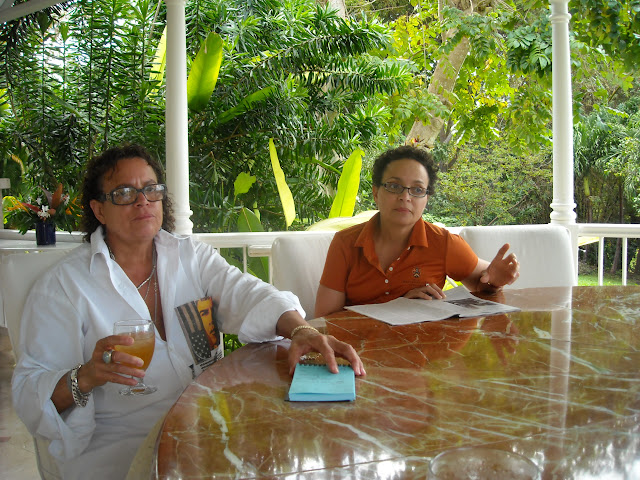 During vacation in late February, I was at Waterhall checking some chukkas, I saw a lady with what appeared to be a customised Barack Obama blouse and I complimented her on it. She said she did it in honour for when her father was honoured by the 44th POTUS.

A light came on in my subconscious somehow and I asked why he was so decorated and learned Angela Williams was in fact the daughter of one of the main Tuskegee Airmen – Robert Williams. Angela with her sister Robin were here in Bim vacationing and resting at a lush and expansive Sandy Lane villa. Also with them was Cheryl Gould-Bailey another Next-Gen of Tuskegee. 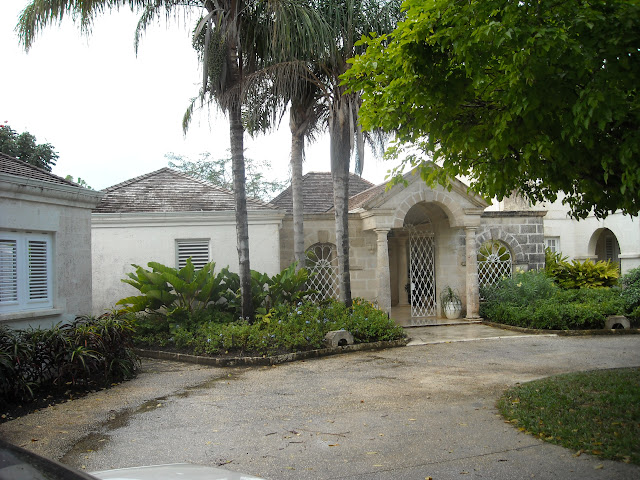 I explained to them that there was a “Buck” Newsum from Barbados and they said he graduated after the senior Gould & Williams team.

For those who came in late, what is so special about the Tuskegee Airmen? These are the edited words of the daughters – In 1942 Franklin Delano Roosevelt as US President launched what was considered a brave experiment, to allow BLACK men to serve in the US armed forces as PILOTS! {Actually, the real reason was they were running out of recruits!}

It was felt that aeronautics was considered intellectually challenging for Negroes (The wording back then), please note when the Tuskegee Airmen were culled from the steelyards at that time – their maps were MEMORISED so as to avoid dissemination of info to enemy lines! {My view here} So what intellectual challenge was there?

Much of the memorabilia is under lock and key at the Palm Springs Air Museum as well as a mural on display, the place where “Cool-Papa” Gould and Mr Williams trained in Moton, Tuskegee is now a Municipal airport. 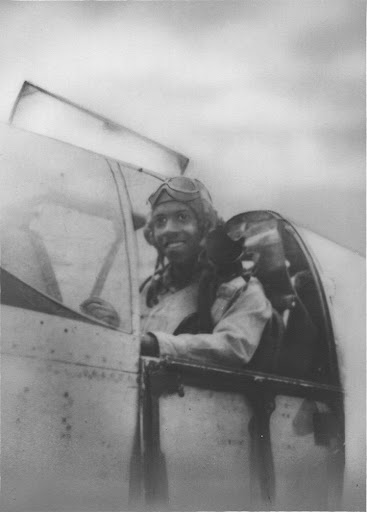 Cuba Gooding Jr played the part of the composite character “Billy Roberts” in the HBO production, and as a made for TV film, it airs every February for Black History month in the United States. In the picture, which took Robert Williams 43 years to get made and distributed, he combined more than one of the crew into a single character as the story may have taken longer to tell.

Now, Dreamworks is negotiating with surviving family members to retell the story in live-action mode and as it really happened. It is President Obama’s love and reverence of History which led to his ensuring that all surviving Tuskegee Airmen and/or family members were invited to his inauguration earlier this year, and last year the remaining families received Congressional Gold Medals of Honor for the yeoman service rendered to America despite massive disrespect.

(Even when Robert Williams was a decorated war-hero in the US, he’d made the mistake of sitting in the front of a bus and the driver pulled a gun on him and told him to move to the back, NOW!) 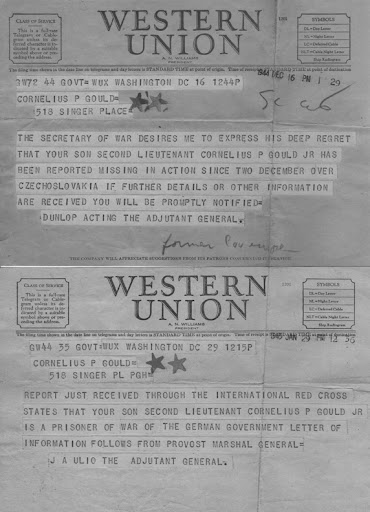 One can safely say that the Tuskegee Airmen paved the way for Rosa Parks, Dr ML King Jr and the entire Civil Rights movement – white officers would switch roll-calls or alter the reveille for mess-time to try and smear the punctuality records of the crew among other petty pranks… This despite the fact whenever they were called upon to escort a bomber they never lost a mission or their charge!

When Cornelius P. Gould – aka – “Cool-Papa” Gould was eventually caught behind enemy lines, it was due to mechanical problems. Germans there did not know what to make of him and his skin and contacted US command who declared him an honorary “white” so he could be incarcerated with Caucasian commissioned officers! 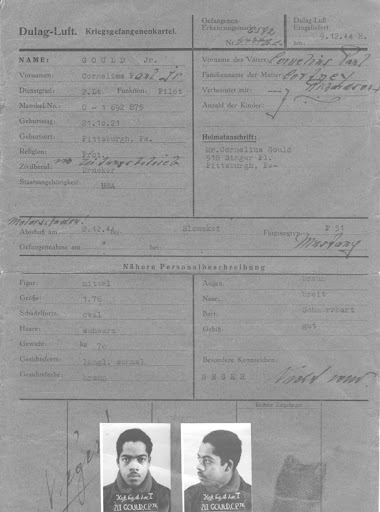 Here is what CP Gould’s son recalls of his father;-

Dad was a member of the 332nd Fighter Group. He came out of Tuskegee Institute in 1943, in the class of 43-B. He was sent overseas and was stationed first in North Africa, then in Romitelli, Italy at the rank of Second Lieutenant under the command of then-Captain Benjamin O. Davis (later to become the first black 4-star General). He flew 59 missions, escorting bombers in raids over Germany, Czechoslovakia, Poland, and Hungary. Dad went down in December, 1944 in Czechoslovakia on his 59th mission, a raid on an oil field in northen Germany, due to engine trouble, and was captured. He was imprisoned at Stalag Luft I prison camp on the Baltic Sea during the brutal winter of 1944 and was freed in 1945 when Russian troops overran the area.

In the 3rd generation of Tuskegee, one of Robin’s daughters is into equestrian sports and polo. From the 2nd generation – Angela is an Interior/Landscape Designer and is also an artist who not only designs clothes but creates jewellery; Robin is involved in legal advice for many non-profit organisations, while Cheryl’s brother is in the Civil Air Patrol. 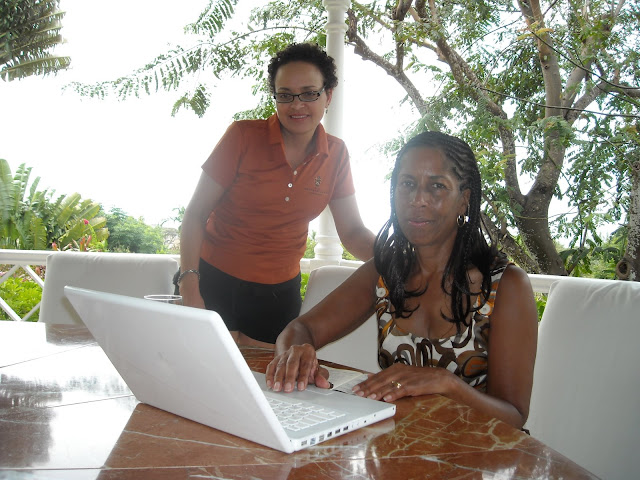 They have only come to Barbados in the Caribbean and have been doing so for the last five years, the Williams’ also have real estate in Argentina where they also pursue the thrill of the chukka! I thank all of the families once again for a magnificent privilege and hope the Dreamworks project is respectful of the truth which should never stop being told! (My thanks to Cheryl for the original high-res reproductions, these are various aspects of her dad – “Cool-Papa” Gould – in his term with the Airmen)

My advice to local reporters is stop thinking polo is a rich white man’s sport, and when you’re at one assignment you can pick up another story which is just as important – if not more so!