First off, how did I mess up my leg? I was trying to get a better point, so I went behind the Altman’s tent and was balancing along a grassy slope – it was drizzling throughout the game, next thing I know I am doing a James Brown split since I didn’t want to mess up my Coolpix L18… Ouch!

Staggering like Igor thereafter (Copious rounds of Mount Gay did not dull the ache unfortunately), I still followed both matches and observed festivities into the night. I visited the Royal Pavilion tent where there were gorgeous lamb ribs with a marvellous dip and strawberries swirled in dark and pink chocolate – no wonder visitors come to Barbados just to get pampered with Fairmont’s popular resort!

Karen Kranenburg was all in black and ecstatic her Jamaican version of Polo & More is out (That will be reviewed shortly), Hartley Henry was there, Bizzy & Shelly Williams, Marsha Branch – formerly of the BBC Caribbean, Catherine Mapp – Sales Manager of Royal Pavilion as well as the Prime Minister among many other dignitaries. Last year was packed but this year was burst, it seemed easily over a thousand if not 1,500 to two thousand!

This time around there was a camera crew from City TV of Toronto there to get the action, was glad to be of help! 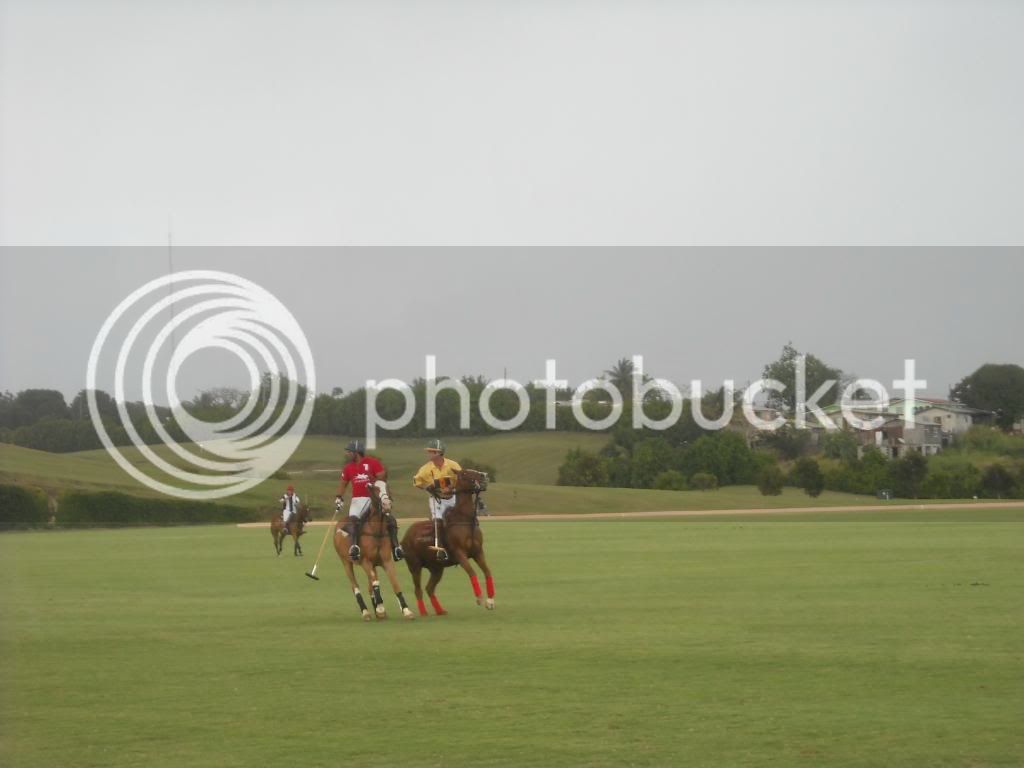 The first bout was between Egerton and the Lion Castle team and Egerton edged with 3 to 2, Adam Deane once again being the deciding factor in this opener. Adam was ably assisted by Harry Manning, meanwhile – it was Richard Gooding who did the work for Lion Castle in the tropical mist.

Cheshire has been visiting Bim since November 1967, and last year, Barbados won over the UK crew and this year the advantage was switched, in a 3-1 overall game favour no less. Teddy Williams, Philip Tempro and Alex Cole all had topples but luckily they fared better than myself – this was due to the persistent drizzling that day. Even Cheshire had a tumble via Spaniard Cristian Chaves, but as I said – nothing serious, this time!

Philip Tempro drew first blood fast but Cheshire soon made up for the deficit and it was 1.5 to 2 in Barbados’ favour at half-time before the 3rd chukka. In the end, Oli Taylor’s mallet made hash of the Bajan score and with a half-point advantage, Cheshire made it 5.5 to 2 by twilight.

Prime Minister David Thompson was there once again and expressed gratitude to the Cheshire supporters (NB – The recording was done at dusk);-

I managed to get both teams to autograph the polo ball I got at Holder’s, and got a shot with the UK guests at the trophy stand, and Captain Howard Taylor saw the victory not just as his team, but all of the supporters;-

During the half-time there was Paul Archer and his trusty egg-beater ferrying in the entertainment of the nite… Craig and Nichola from the MSY Windsurf. These two had the place rocking – among many other tunes, he can sing Crazy from Gnarls Barkley and not miss a beat, which is a difficult song to keep pace with!

Craig has been in music both on land & sea for 20 years and uses a laptop as his orchestra, while his fiancee Nichola has been singing for the last seven years. I was asked to keep the camera quiet after a while, since it was done in private and I was not ordered – I had no trouble in complying, but I still saw three other shutterbugs at it late in the evening. WTF gives? All for one or none for all?

That reminded me when I sought to get a photo of the DI guys setting up their Breitling booth at Holders’ for the initial match of this series, and I was told I had to wait until they finish setting up – my point at the time was to show the guys did a lot of hard work and not just pose by some sexy watches waiting for a sale…

We’re all in this together folks, my photos promote your event and if you had no event, then I would have to find something else to do, eh?