BVI’s Callaloo Poets, in conjunction with their local UNESCO office, revealed the winners of the World Poetry Day competition. The competition, which was opened to students aged 5 ? 16 to write a poem under the theme ?How Can I Make the Community a Better Place,? received 19 entries. Three poems were submitted by students in the 13 ? 16 age group and 16 poems were submitted by students ages 9 ? 12. 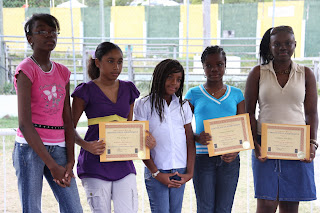 Saskieya Buckley of the Bregado Flax Educational Centre Secondary Division won the first prize of $100.00 cash prize with her poem titled ?Bring Back The Love? in the 13 ? 16 age group. In the 9 ? 12 age group, Elmore Stoutt High School student Jamoia Jennings was the first prize winner and Samora Lewis of Cedar School earned the second prize. Jamoia received a $75.00 cash prize and Samora received $50.00. The cash prizes were donated by the BVI National Commission for UNESCO.Three other young poets were awarded special prizes and gift certificates for a ?Powerful Poetry Presentation?. Nema Henry of the BVI Seventh Day Adventist Secondary School in the 13 ? 16 age group, and in the 9 ? 12 age group, Nia Douglas of the St. Georges Secondary School and James Nicholas of the Cedar School, were all cited for their well-written submissions. Mrs. Alison Flax-Archer, the Acting Secretary General, BVI National Commission ? UNESCO presented all the prizes to the winning students. 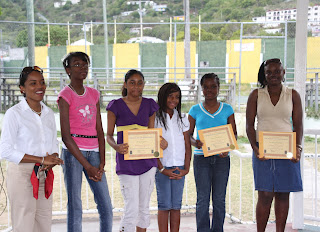 The Callaloo Poets would like to thank the students, parents, teachers and our local UNESCO office for making World Poetry Day a success. That group plans to hold more competitions in the future and look forward to more participation from the BVI’s public schools.

The Callaloo Poets next reading is scheduled for April 18, 2009 at Mellow Moods at 7:00PM.