Zedstar is ready to release at the same time his latest song “Flyin’ Away” with a music video, shot with Nicola Fiore, a beautiful sexy actress well-known to fans of Horror Films in the United States.

In still photos from the video, Zedstar looks in a “calm-style“, in honor of his first love song, while the girl shows her best in some provocative scenes. 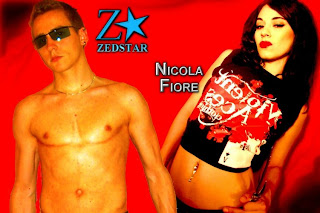 The video was shot entirely outdoors, among a bright and enchanting Italian mountain landscape, and it will be officially released in next days.After the clip will air for the first days on world-wide music channels, fans will have the chance to check it out online on Zedstar’s official Web site.When last the pop star was interviewed on Fox, he said he was waiting on a proposal by the biggest record company of the world to participate to the next MTV Europe Music Awards (Berlin will host the 2009 edition).

Maybe this time can be the right time, considering that the career of the winner of the last edition, Britney Spears, has began its musical re-launching with the release (through the net) of “Britney Spears ft. Zedstar – Break the ice“.