Here’s hoping the Barbados Government of the day can use a neighbour as a guideline for proper respect due for a “green lung” of an island, this in a territory already accused of over-development;-

The Dominican Republic‘s Ministry of Environment has continued its forceful environmental recovery programs for 2009 by turning it focus to the wetlands of the Ozama National Park.As part of World Wetlands Day celebrated on 2 February, Santo Domingo’s Environment Minister Jaime David Fernandez Mirabal, together with other government officials, made their way to the wetlands to observe conditions on site. During their visit, fish were released into the wetlands and according to Hoy these fish will multiply within six months, allowing for them to be fished.

The Ozama wetlands are the second largest in the country, after the ones at the Lower Yuna river basin. They cover an area of 47 square kilometers, or 12% of Santo Domingo province, and are one of the most important natural sites in the greater Santo Domingo area.

According to the Ministry of Environment, the Laguna Manati is the second largest of three lagoons in the wetlands that act as habitats for endemic birds of the DR, as well as migratory birds including ducks and geese. The other lagoons are Flamenca and La Enea. 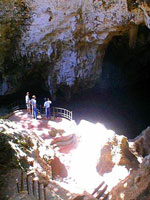 Among the equipment seized were “blenders,” fishing nets and illegal fishing boats that threaten the ecosystem. Environment Ministry officials explained that the “blenders” are nets with small hooks and knives that are dragged along the ocean floor, killing any animal in their path and damaging the ecosystem.