Barbadian sensation Philip 7 has completed his first album, Masala, much to the satisfaction of his growing fan base. Since the release of the alternative rock single “Beautiful Surprise” he has steadily become one of the Caribbean’s most sought after artistes. The single gained him recognition for his versatility and musical dexterity since its release in 2007. His consistent, well timed releases of singles that touch varying musical genres has ensured that audiences from across the musical landscape now have a taste and a growing hunger for his style. 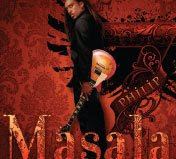 The album makes a smooth transition between alternative rock, pop and reggae. Amongst some of the featured tracks on the Masala album are “Unconditional“, “Looking For“, “Nothing Left To Say“, “Space and Time“, ” Who You Are” and the love anthem “Beautiful Surprise” in an alternative rock and reggae remix. Canadian producer Derek Brin, Barbadian producers Gary Serrao and Chris Allman, Jamaica’s leading producers Stephen McGregor, Clive Hunt, Donovan Germain and Richard “Shams” Browne have all played a part in the album. Amongst the songwriting credits are Tony Hoyos (Barbados), Curtis Richardson (USA), Rupert Gayle (Canada) as well a few tracks written by Philip 7 himself.