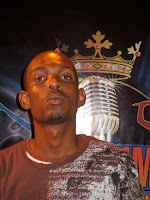 20-year-old Medal Tally started singing back at William Knibb High School in Trelawny as well as at home with his family. “I remember at times when my mother would give me things to do and I never did it she would say: I bet if it was a song you would have known or done it long time’,” recounts Medal Tally.

Even though the competition is only warming up Medal Tally believes that he has learnt some lessons. “I’ve learnt that I need to be confident and optimistic,” he said in reference to his stage performance. He added, “I learnt also that it is good to have a lot of fans and to promote yourself so that you can get a lot of votes” 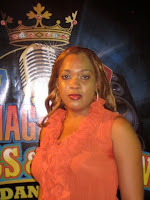 Describing herself as a musical person, 26 year-old Sasha-Lee reveals, “I have been singing for a long time now but I started Dee-Jaying back in 2003.” Asked about the change Sasha-Lee noted: “really at that point I took myself serious for what I had?a talent and a gift”. She explains that she was considering writing and selling her songs, “but after I showed some of my friends and family members they said that I would be better at delivering them because I knew what they meant”. Noted Sasha-Lee.

It was her original song Walk Out that claimed for her the position of one of the princesses from the Montego Bay. Sasha-Lee affirms: “Despite the clich? that ‘2009 is my time to shine’, so much has been happening for me and I know it’s definitely my time to shine I’m going to be winning Magnum King and Queen of Dancehall”.

Montego Bay Princess: T-Gee
Since entering Magnum Kings and Queens of Dancehall things have not been the same for T-Gee. The Gangster Love singer boasts having fans as young as 7. 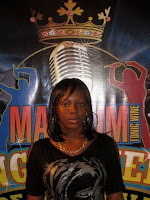 She claims: “Sometimes walking in Montego Bay I hear people shouting “Miss Magnum”, “Before advancing in the competition I was signing autographs and I am signing more since advancing.

The contestant who just celebrated her 23rd birthday is already preparing for the next round T-Gee says: “Even though I’m not in this week’s elimination I’m nervous, nervous even though I’m not gonna be singing before an audience until two or three weeks nut I preparing myself to bring it.”

Hailing from the Gimme-me-bit community of Clarendon, this sing-jay sees himself as a artiste with the determination to win the second season of Magnum Kings and Queens of Dancehall. For the 23 year old, the reason for entering the competition goes far beyond the money. “I want to talk to the youth, I want to tell them that the way they are behaving is not the right way?at times you see some youth doing something wrong and you have to think twice,” commented the sing-jay. RC feels confident that he will have the chance to talk to the youth on Magnum Kings and Queens of Dancehall.

Nazine entered the All Together Sing school choir competition on TVJ in 2007 to satisfy the growing passion for music that developed within him from grade 8 at Bog Walk High School. He was however not satisfied and with the encouragement of teachers and peers he decided to enter this year’s competition. His peers said his voice had a melody that was suitable for a music career. While it is different being a sing-jay versus a choir member Nazine believes that every experience for an artiste is a new opportunity to grow. “The experience is different, I savour every moment of it and recognize the great opportunity I have” Says the confident sing-jay.

Question was a Beyonce R&B hit song but Jody Miller penned her own version to ask young persons ‘living on the edge’ how they want to be remembered and what they want for themselves. The sing-jay belts out lines like, “do you wanna be a shaded memory?do you want to be read in a newspaper.” The Hellshire Park resident reveals, “I sing about reality and that is the reality around me”. She continues: “I don’t see myself writing explicit songs but more of uplifting songs”. Jody Miller, who played the violin while in high school, says she feels a connection with Magnum Kings and Queens of Dancehall because it allows her to express herself and reveal her talent.

Persistence is essential according to Latty. She believes that artistes need to constantly be working on their talent, especially if they want to succeed. It wasn’t strange then that after she missed out on being selected as on of the top candidates from the May Pen audition that Latty Fabulous again auditioned in Portmore; moving one step closer to success. Writing her own songs, Latty Fabulous prides herself on being a song writing machine and one out to create a big effect on Magnum Kings and Queens of Dancehall. Her friends are also confident that if she does not emerge victor someone must see her and want to work with her.

Groups are in every genre of music and dancehall is no exception. Gangsta Wasp, Medallion and Crazy Kid are celebrated as the only group so far to make it to the Live Show round; they are doing so under the name Triple Threat. 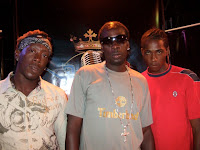 The young group has been together since 2005 but have a strange tale of how they got together for Magnum Kings and Queens of Dancehall. “I auditioned in May Pen and was turned down, Medallion went to Portmore and Montego Bay, and Crazy Kid went to May Pen, Portmore and Montego Bay and they too got turn down, we then decided that we would go as a group to Ocho Rios and that’s how we made it to the final round” said Gangsta Wasp. Medallion who hails from St. Catherine revealed, 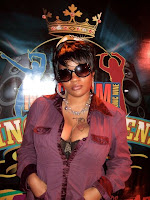 “It is like a dream come through, we work very hard and dedicate a lot of time to our music, we won’t disappoint.”

Songwriter and sing-jay Destiny admits that she loves music and that her music icon in the industry is Lady Saw. Coming from a musical family and with years of experience there was no surprise that she would blow away voters and cop one of the spots from the Ocho Rios audition with her original song, Goodas Gal . “I’m looking to Magnum Kings and Queens of Dancehall most of all for the exposure,” beamed Destiny. 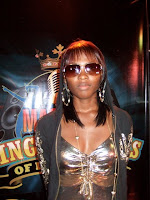 She continued: “I have this fear of performing on stage, so I’m seeing this competition helping me to overcome that fear”.

With lyrical prowess and style, Sexy K started singing in the church at 6 years-old. She still recalls the songs that she used to croon. Maturing in the choir and delivering acts while at her past high school in Oracabessa, she has grown into the capable deejay. Like the boys she was never afraid to belt out a chorus or an entire song at lunch or break time; when she wetted the appetites of her friends. She confirms: “I have exciting dreams about the music business and entertainment, so I will make use of this opportunity to enhance my career“.