I found this in my e-mail inbox since last week and I was quite startled at the accusations levelled in it; of course – I contacted members of both the Foundation & Sanctuary… Some of the replies were long in forthcoming – thus the late details in bringing it fwd, but it needs to be examined since if I got this e-mail, then I am not sure how many others received it! I have edited certain parts for legal reasons. Here’s what the lady’s concerns were and why;-

My dogs have more than a few hundred acres in which they can run and play safely; although they mostly stick to the 3 or 4 of the plantation yard. They are fed twice a day ? and their menu is varied. Admittedly, their mother (yours truly) doesn?t take them for ?all the shots? (but then she doesn?t inoculate the children either, so draw your own conclusions) and they don?t have fancy collars or get bathed and groomed weekly (the dogs, not the kids!). All in all, however, they seem a pretty happy bunch and none of them has ever suffered a major illness.

Four of the five, were neutered by Dr. Huey at the RSPCA without any problems or repercussions. That leads me to my story. On Tuesday, January 20, the Hope Martin Foundation brought their mobile vet unit into the ?yard? to neuter 4 of the neighbour’s dogs. He called and told me they had informed him that they could do up to 14 such operations in one day and so had suggested he gather others who may need their services and that way the best use of time and money would be served.

Since #5 ? a recently adopted stray ? had not made the journey to Fontabelle, I decided this would be a good option. I took the dog over to the Hope Martin unit, indicating that I would have to leave shortly before 10 a.m. for an engagement, but would be back at Noon. They agreed the timing would be convenient. When I stopped by the unit on the way out to drop off my fee, the vet said that the operation had been done and the dog could go home. I took him back to the house, ensured he looked okay and headed out. I returned later and all still seemed well.

At around 5 pm, I left my daughter in charge of feeding with everything prepared according to the instruction sheet I was given by the Hope Martin staff. Returning at 7 pm I found the dog lying in a pool of blood at the front door. I checked carefully and stitches were intact although the scar was oozing blood. I monitored his progress and when things did not improve I called the emergency numbers provided. The land line was answered by a machine, the cell phone line was turned off.

Getting perturbed, I called [the vet] ? a caring doctor and acquaintance. [He] told me that he didn?t think the situation life threatening ? to continue trying to reach the Hope Martin staff and if necessary, he would examine the dog in his office the next morning, although the clinic was closed because of the Errol Barrow bank holiday. As bleeding continued, I searched the internet for information and eventually found a paragraph that indicated that if the scrotum sack appeared overly swollen then there was likely internal bleeding. Upon checking I noticed the scrotum sack was enormously swollen. Monitoring continued and I tried application of an ice pack to reduce swelling.

At midnight I realized that things were not improving and the dog was becoming lethargic. I called my brother as [that vet] is a very good friend of his and asked for help to get the dog to the vet at a decent hour in the morning. By now messages had been left for the Hope Martin personnel but none returned. My brother superseded my desire & called [the doctor] at home explaining the circumstances.

To make a long story somewhat shorter ? [He/Vet] did the emergency surgery, I administered the anesthetic and my brother (who is not ?good? with blood) lent moral support. Operation completed by 2:30 a.m. whereby a blood vessel [was sutured], several large clots were expelled from the scrotum sack and [all loose ends were tidied up]. A happy ending to an entirely distressing experience ? did I mention the dog stopped breathing at one point during the procedure? Thank God, he?s feeling well enough today to try to outrun the garbage truck as usual. 🙂

Upon return home I called the Hope Martin numbers again and expressed my displeasure at not only [what happened] which could have caused my dog his life, but their total lack of consideration in having [an after-hours] number. As my neighbour also experienced problems and he had the personal cell number of one of the vets, he relayed my story to them the next day.

I received a message on my phone about noon Wednesday apologizing and citing that the cell phone had not been working (if you did at least 10 operations in one day & your phone wasn?t working, wouldn?t YOU consider remote message access on a periodic basis ? maybe I?m just too efficient to be a Hope Martin vet!). They also offered to pay [for the remedial surgery] ? which I guess they will do with funds donated by supporters. In fairness, I guess they have done all they can to try to rectify the situation. I’m still upset enough not to be soothed, but forgiveness has been granted.

This message, however, is not to slam the Hope Martin Foundation. This message is to relate my story and give a few helpful hints in the hope that no-one has to endure what our family (and by family, I include my little dog, because that?s what he is to us) had to this week.

1) Don?t have your pet spayed or neutered on the day before a weekend or Bank Holiday ? although most clinics have weekend & holiday hours, it?s much harder to get help at those times.

2) Ask for a specific contact person in case of emergency ? I can?t read the signature of the vet on the Hope Martin certificate so I didn?t even know who to try to find when the emergency number didn?t work.

3) Educate yourself on the procedure in advance ? the ?net has some good information and forums.

4) Monitor your pet carefully for any signs of something amiss, especially internal bleeding. On male dogs the scrotum sack should resemble a deflated balloon after the surgery ? if it doesn?t then you may have problems.

5) Watch for personnel who close incisions with continuous sutures. This means that the stitches follow one after the other. Since stitches can be dissolved by saliva and dogs naturally want to ?lick their wounds? then if one stitch is dissolved the rest will simply unravel. Ensure your practitioner ties off each stitch individually so the loss of one or two stitches will not mean that the wound will ?open?.

6) Make sure that whoever does your pet?s surgery has the facility to handle emergencies and if necessary, board the pet.

7) Prepare a recovery area for your pet – he/she should be kept quiet so plan to cage him/her or set up an appropriate indoor space.

There are other helpful hints to be found online, but to me these are the most pertinent.

Although my story is long, I hope you?ve taken the time to read it and that you and your pet have a long, happy, healthy life together. Remember – spaying/neutering your pet is a responsible, caring thing to do.

Now when I read this, I was a bit stunned, especially after what I know to be a very important charity! After some badgering on my part I did get an answer from the Foundation’s Laura Heath, and she was able to clarify certain areas;-

The vet on duty in all sincerity thought the phone was working, she went to bed early and did not realise there was a problem till he following day. However, we are now placing extra measures to avoid a repeat of [her] experience. It should not matter if the dog is neutered before a bank holiday/weekend our vets fully expect to answer.

Well, now that matter is put to rest, here is a chance to make a difference with stray animals and pets across Barbados, all you have to do is check this movie… 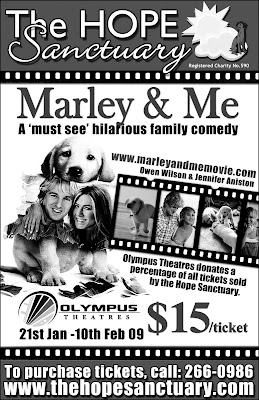