WI Captain Chris Gayle and the equally experienced Ramnaresh Sarwan hit fluent, unbeaten half centuries to lead the West Indies into a position of strength at the end of the 2nd day in the opening Digicel Test against England at Sabina Park on Thursday.

Gayle cracked an unbeaten 71 and Sarwan added 74 not out as the home team powered to 160 for one in reply to England’s first innings total of 318. 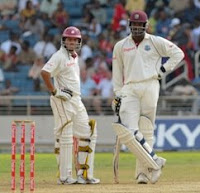 The pair added 142 unbroken after England had made early inroads with the wicket of Devon Smith for six. The 29-year-old Gayle slammed three sixes and three fours off 120 balls while Sarwan, 28, notched seven fours of 181 deliveries.

Earlier, left-arm spinner Sulieman Benn completed career-best figures of four for 77 as England carried their overnight 236 for five to 318 all out just after lunch.

Pacers Jerome Taylor (three for 74) and Daren Powell (two for 54) were also impressive for the West Indies.

Taylor and Powell made the initial strikes with the second new ball early on day two.

Powell removed the dangerous Andrew Flintoff (43) without adding to his overnight score. The England all-rounder miscued a square cut to Brendan Nash at backward point.

Taylor soon accounted for Stuart Broad (4) as the left-hander edged to gully where Benn clung on easily.

Matt Prior held together the innings with an assured 64 before he was eighth out at 288 when Benn pouched a nice return catch off a firm drive. The England wicket-keeper hit seven fours off 108 balls.

Ryan Sidebottom, surviving a chance to Shivnarine Chanderpaul off Fidel Edwards early on, contributed an unbeaten 26 to boost the lower order.

But the West Indies wrapped up the innings early in the second session as Steve Harmison and Monty Panesar fell in quick succession.

Both players were LBW, Harmison to Taylor and Panesar to the impressive Benn. Both decisions were challenged by the batsmen ? two of five challenges throughout the day ? but both were upheld after the TV review process and consultation with the third umpire.

The West Indies were not so lucky when they replied as Devon Smith, originally given not out after an lbw appeal against Flintoff, was sent on his way after TV review.

The diminutive left-hander played no stroke to a full length delivery from Flintoff after appearing to lose sight of the ball.

Sarwan survived some early anxiety, himself profiting from a successful challenge after he was given out lbw to Harmison when just five.

He and Gayle went to tea on 63 for one and the pair took control in the final session and as the spark went out of the England attack.